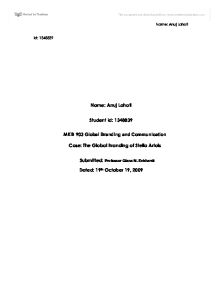 Name: Anuj Lahoti Student Id: 1348839 MKIB 903 Global Branding and Communication Case: The Global Branding of Stella Artois Submitted: Professor Giana M. Eckhardt Dated: 19th October 19, 2009 Introduction Interbrew traces its roots to Brewery called Den Hoorn which was located in a small town outside Brussels since 1336. It was purchased by Sebastiaan Artois in 1717 and brewery changed its name to Artois. After its merger with another Belgian brewery called Piedboeuf in 1987, the company was named Interbrew. It entered the rapid growth stage after 1990 by acquiring or merging with different breweries all around the world and now established it as one of the largest beer companies in the world. Beer Market World beer market was growing at an annual rate of one or two percent with total consumption reaching around 1.3 billion hls. The market was divided in two growth and mature markets. Mature market like North America and Western Europe was virtually stagnant and some market like New Zealand started to decline in 1990s. Whereas in Eastern Europe, Asia, Central and South America average consumption was around 30 lpc and was increasing at a good rate which provided opportunities to expand their horizons. The world beer industry was relatively fragmented by four major players accounting for 22% of world market. ...read more.

It was important because all the main competitor of Interbrew had a global brand (e.g. Heineken, corona, Fosters, Budweiser). Market segment for global brand was small but had potential to grow because Many consumers became increasingly attracted to the sophistication of premium and supper premium beers. Market trends supported the strategy of introducing a Global Brand as many consumers were seeking more variety and others were seeking lower prices.Second trend was the internationalization of the beer business as consumers travel around the world consuming global media. Global Brand will create synergies in advertising and sponsoring and reduce cost. Stella Artois as Global brand for Interbrew The company had two choices Labatt Blue and Stella Artois, company choose Stella Artois to represent it globally was a good decision taken by the company. The decision made sense as Stella was the oldest and most broadly available brand in the company's portfolio. It achieved great success in UK, different parts of Europe, Australia and New Zealand where it was priced at a premium. Its sales increased from 3.4 million hls in 1992 to 6.7 million hls in 1999. In 1999 total Stella Artois volume accounted for 10% of sales for Interbrew portfolio which included large number of local brand, especially those in Mexico with very high volume. ...read more.

It helped them to solidify the base for sustained long term growth. This plan had some more advantages as the cities chosen had right concentration of affluent customers this provided scale for marketing and sales as well as getting attention from wholesaler and retailers. These places will become a highly visible success stories which will enhance the brand image of the product. This approach demanded that marketing efforts and funding to support had to be centrally stewarded and local tailored to reflect unique local environment. Conclusion Interbrew made the right decision in launching a global brand. With its unrivalled strong portfolio of premium brands they already had a quite strong position in the growing premium beer segment. The company noticed that internationalization and global media offered the chance to position a brand global and receive higher margins even in the declining Mature Markets. The approach of a differentiated marketing strategy has to be seen more critical. The focused target group can be easily identified but the marketing efforts include financial risk. Marketing expenditures were doubled with that campaign. In the beginning it certainly interests the costumers but there is also the risk of over-whelming them and loose them in the end. In a situation of an economical crisis fewer costumers will favor high priced products and prefer a more bottom-grounded product or even choose the total opposite, an economy-priced beer. ?? ?? ?? ?? Name: Anuj Lahoti Id: 1348839 ...read more.