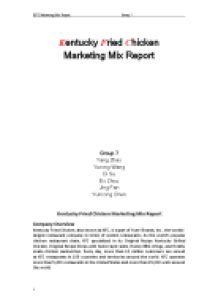 ﻿KFC Marketing Mix Report Group 7 ________________ Kentucky Fried Chicken Marketing Mix Report Group 7 Yang Zhao Yurong Wang Di Su Bo Zhou Jing Fan Yuncong Chen Kentucky Fried Chicken Marketing Mix Report Company Overview Kentucky Fried Chicken, also known as KFC, is a part of Yum! Brands, Inc., the worlds? largest restaurant company in terms of system restaurants. As the world?s popular chicken restaurant chain, KFC specialized in its Original Recipe Kentucky Grilled Chicken, Original Recipe Strips with home-style sides, Honey BBQ Wings, and freshly made chicken sandwiches. Every day, more than 12 million customers are served at KFC restaurants in 109 countries and territories around the world. KFC operates more than 5,200 restaurants in the United States and more than 15,000 units around the world. This report focus on identifying KFC?s target market, analyzing its product, distribution, promotion, and pricing strategies that may produce satisfying exchanges with the target market, and Providing recommendations for the company?s further development. Target Market KFC has divided its global market into various groups of consumers who have different geographically demands, taste preference and behaviors. KFC has made its marketing segmentation according to the following bases: (1) Geographic Segmentation From the microscopic view: Since KFC is a fast food chain restaurant, in which customer would like to have a quick bite, its outlets are required to build on a well traveled, major street, with good ingress and egress, good visibility and ample space for parking, among other things. From the macroscopic view: According to KFC?s franchising report, while in the western U.S., there are totally no available spaces to built new outlets, in the eastern U.S., there are still plenty of opportunities to develop the new outlets. ...read more.

For this reason, KFC is facing the great pressure to change its price strategy in order to solve the problem. Promotion Promotion is the method used to inform and educate the chosen target audience about the organization and its products. The promotion of KFC is quite varieties such as TV program, Internet, public relation and so on. Moreover, KFC innovates a new menu set for it is easy to order and can save money. A special menu set also is cheaper than normal. At KFC, promotion is the main tool to bring all chicken lovers attention towards its delicious one-of-a-kind. One of KFC?s promotion methods is sales promotion, which includes Premiums, Exhibits, Coupons and Entertainment. Premiums For sale promotion KFC has used premiums strategy that give gifts as premiums like watches, keychain, coffee cup, T-shirt, toys to attract customers especially teenagers. Exhibits KFC sometimes will hold a huge exhibition in public and let people know the history of KFC and its new products. Since the exhibition will attract people various from different ages and social statues, KFC are able to enlarge its consumer market significantly. (3) Coupons All KFC outlets offer its customers with various forms of incentives to buy its Chicken. Using coupons that one can acquire after spending a particular amount over a period of fixed time, customers can enjoy the benefits of free meals or free add-ons. Additionally they provide meal vouchers and exciting offers in their print ads, which the customer must cut and bring. This strategy can attract many people from middle or lower class people in the U.S. who are always seeking for a lower price. (4) Entertainment In some KFC restaurants, children can have a special birthday party and they can play in the amusement area to get a lot of fun. ...read more.

2. Open more outlets in downtown and other population-concentration areas. While McDonald and subway target on individual, KFC prefer to family. However this doesn?t indicate that KFC couldn?t enter the individual market. KFC can simplify the meal which is more suitable for individual?s intake and open some outlets at downtown and some other high population concentration areas. The outlet located at those areas could not only have higher sales but also promote the brand image to more and more people. 3. Coordinating with those companies whose target are also young people and do a series of coordinated promotion. For example, KFC can coordinate with toy companies so they can manufacture some kinds of exclusive toy that are accompanied with kids? meal. Besides, KFC can coordinate with some Hollywood companies, promoting the upcoming movies? and KFC meal together. This conveys a message to customer: you can watch movies at home, with the enjoyment of KFC?s fried chicken wing. 4. R&D more kinds of food made without increasing-price material. In these years many commodities? price keeps going up, such as corn, which accelerates the cost of chicken and erodes KFC?s gross profit directly. To deal with this serious problem, KFC should release more kinds of meal what are not made of those increasing-price materials. For example, KFC can release some vegetable meal, like salad and soup, accompanied by the promoting concept of healthy diet. KFC can charge this food higher than normal food, thus make up the lost of increasing cost. Reference 1. Crewe and Alsager Faculty, STRATEGIC MARKETING: PLANNING AND CONTROL, 2003 2. The Hoovers, KFC Business Intelligence, Hoover Research Journals, 2008 [Online accessed 1st May 2008] 3. Rahzzla Zolaiqar, KFC Project, 5th of November, 2007 4. Lamb, Hair, McDaniel, Marketing, 7th Edition, 2004 5. Yum! Brands, Inc. Annual Report, 2008 6. http://www.kfc.com/ 7. http://kfccoupons.cre8hosting.com/index.php?zipcode=97201&submit=Submit ...read more.