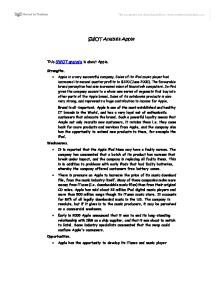 SWOT analysis of Apple and Amazon

SWOT Analysis Apple This SWOT analysis is about Apple. Strengths. * Apple is a very successful company. Sales of its iPod music player had increased its second quarter profits to $320 (June 2005). The favourable brand perception had also increased sales of Macintosh computers. So iPod gives the company access to a whole new series of segments that buy into other parts of the Apple brand. Sales of its notebooks products is also very strong, and represents a huge contribution to income for Apple. Brand is all-important. Apple is one of the most established and healthy IT brands in the World, and has a very loyal set of enthusiastic customers that advocate the brand. Such a powerful loyalty means that Ample not only recruits new customers, it retains them i.e. they come back for more products and services from Apple, and the company also has the opportunity to extend new products to them, for example the iPod. Weaknesses. * It is reported that the Apple iPod Nano may have a faulty screen. The company has commented that a batch of its product has screens that break under impact, and the company is replacing all faulty items. This is in addition to problems with early iPods that had faulty batteries, whereby the company offered customers free battery cases. * There is pressure on Apple to increase the price of its music download file, from the music industry itself. ...read more.

For example the company announced a deal with the British Library, London, in 2004. The benefit is that customers c an search for rare or antique books. The library's catalogue of published works is now on the Amazon website, meaning it has details of more than 2.5m books on the site. * In 2004 Amazon moved into the Chinese market, by buying china's biggest online retailer, Joyo.com . The deal was reported to be worth around $75m (�40m). Joyo.com has many similarities to its new owner, in that it retails books, movies, toys, and music at discounted prices. Threats * All successful Internet businesses attract competition. Since Amazon sells the same or similar products as high street retailers and other online businesses, it may become more and more difficult to differentiate the brand from its competitors. Amazon does have it s brand. It also has a huge range of products. Otherwise, price competition could damage the business. * International competitors may also intrude upon Amazon as it expands. Those domestic (US-based) rivals unable to compete with Amazon in the US, may entrench overseas and compete with them on foreign fronts. Joint ventures, strategic alliances and mergers could see Amazon losing its top position in some markets. The products that Amazon sells tend to be bought as gifts, especially at Christmas. This means that there is an element of seasonality to the business. However, by trading in overseas markets in different cultures such seasonality may not be enduring. ...read more.