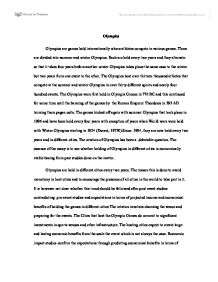 The essence of this essay is to see whether holding of Olympics in different cities is economically viable basing from past studies done on the matter.

Olympics Olympics are games held internationally where athletes compete in various games. There are divided into summer and winter Olympics. Each are held every two years and they alternate so that it takes four years before another winter Olympics takes place the same case to the winter but two years from one event to the other. The Olympics host over thirteen thousand athletes that compete at the summer and winter Olympics in over thirty different sports and nearly four hundred events. The Olympics were first held in Olympia Greece in 776 BC and this continued for some time until the banning of the games by the Roman Emperor Theodosis in 393 AD terming them pagan cults. The games kicked off again with summer Olympics that took place in 1896 and have been held every four years with exception of years when World wars were held with Winter Olympics starting in 1924 (Durant, 19730).Since 1994, they are now held every two years and in different cities. ...read more.

The Cities that host the Olympic Games do commit to significant investments in sports venues and other infrastructure. The hosting cities expect to create large and lasting economic benefits from the scale the event which is not always the case. Economic impact studies confirm the expectations through predicting economical benefits in terms of billions of dollars. The misapplications in these studies are that they project the incomes to be very high. Post - studies have consistently shown that the positive economic impacts of hosting such big sporting events hardly get near the expected results. This is because once the Olympics have been held; the host cities lack functions to utilize the infrastructure built thus most of them remain idle. It takes some considerable amount before the cities get another chance to host an international event that will use the infrastructure (Guttmann, 1992). ...read more.

From the reports on analysis held in the past it would be economical for the games to be held in one city. In the same manner they were held in Olympia, being hosted in one city would mean no construction of new infrastructure or sporting facilities for the event but proper maintenance of the same that have been utilized previously. This would remove the burden of Cities constructing new facilities as well as save the organizing committee lots of funds. The facilities will be guaranteed of being used in future thus not be demolished or lie idle for long. It is however worth noting that the decision of picking one city to be the venue will not be easily acceptable to most as this would be like letting the games favor one nation as was during the ancient times where they were held in the wooded valley of Olympia in Elis. It is therefore purely on economical grounds would hosting in one city be advisable. ...read more.