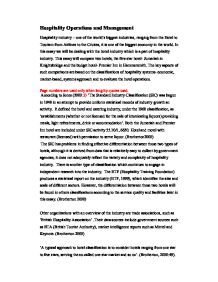 This essay will compare two hotels, the five star hotel- Jumeriah in Knightsbridge and the budget hotel- Premier Inn in Hammersmith. The key aspects of such comparisons are based on the classifications of hospitality systems- economic, market-based, syste

Hospitality Operations and Management Hospitality industry - one of the world's biggest industries, ranging from the Hotel to Tourism from Airlines to the Cruises, it is one of the biggest economy in the world. In this essay we will be dealing with the hotel industry which is a part of hospitality industry. This essay will compare two hotels, the five star hotel- Jumeriah in Knightsbridge and the budget hotel- Premier Inn in Hammersmith. The key aspects of such comparisons are based on the classifications of hospitality systems- economic, market-based, systems approach and to evaluate the hotel operations. Page numbers are used only when lengthy quotes used. According to Jones (2000:3) 'The Standard Industry Classification (SIC) was begun in 1948 in an attempt to provide uniform statistical records of industry growth an activity. It defined the hotel and catering industry, under the 1968 classification, as 'establishments (whether or not licensed for the sale of intoxicating liquors) providing meals, light refreshments, drink or accommodation'. Both the Jumeriah and Premier Inn hotel are included under SIC activity 55.10/1, 6650. Hotel and motel with restaurant (licensed) with permission to serve liquor. (Brotherton2000) The SIC has problems in finding effective differentiation between those two types of hotels, although it is derived from data that is relatively easy to collect by government agencies, it does not adequately reflect the variety and complexity of hospitality industry. ...read more.

The rooms charged from �81 to �93 per night. Therefore budget hotels tend to provide cheaper and more basic guest-rooms with limited food and beverage facilities. (Baker, Bradley and Huyton-1994) Too much detail. What is its market? Similar rating systems also exist in food service sector, such as the Good Food Guide, which is a guide for consumers commercially. Tangible features such as price and service levels are used as criteria for this classification system.Therfore Jumeriah hotel comes under upscale segment of this guide in which casual dinning, high check, moderate check, and a varied menu is provided, wereas The Premier Inn hotels comes under mid-scale segment which is divided into cafeteria, casual dining family-style, hotel, steakhouse and varied menu. (Brotherton 2000) Which satisfies which market? The systems classification is based on systems theory. The standard general systems model of input- process-output-feedback has been described by 'Jones and Lockwood' (2003) very clearly but they were not the original authors. Inputs or resources are typically divided into materials, energy and information, while the outputs are typically divided as product, waste, and residue. For process, it is the main part of whole system after input. 'The conversion of inputs into outputs is achieved by some kind of transformation process that typically requires a physical infrastructure, order, structure, and capacity'. ...read more.

It is a kind of a 'la carte kitchen' and can be called order kitchen usually the two terms have differing meanings.. The flexible, skilled workers are the basic requirement. Therefore The Jumeriah hotel is a job/service shop. As for the Premier Inn budget hotel, it is a limited service hotel which provides the breakfast buffet and limited dinner. The high volume is necessary for this kind of hotel as it is a standardised products/ services hotel. (Brotherton 2000) I am not clear what this section is trying to say. "In the hospitality operating systems five stars hotels have system hierarchy like Head office, regional office, Area office and the main hotel and the hierarchy inside the hotel from General manager to different department. (Ball, Jones, Kirk, & Lockwood -2003) 'Jumeriah' property has both head and area office around the world whereas 'Premier Inn' has a head office in UK, area offices are not established around the world. Therefore hotels which offer drink and accommodation to travelling business are called commercial hotels. Tourist hotels, on the other hand offer services to people travelling for pleasure. (Baker, Bradley and Huyton-1994) 'The Jumeriah Hotel' and 'the Premier Inn Hotel' are successful in commercial terms. However they focus on different customer groups, provide different types and levels of services to their guests by working under so many different types of systems and operations. ...read more.