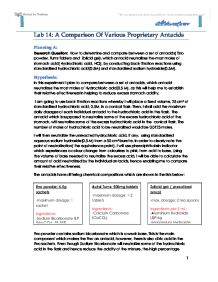 A comparison of various proprieary antacids

Lab 14: A Comparison Of Various Proprietary Antacids Planning A: Research Question: How to determine and compare between a set of antacids( Eno powder, Tums Tablets and Zolicid gel), which antacid neutralizes the most moles of stomach acid( Hydrochloric acid, HCl), by conducting back-titration reactions using standardized hydrochloric acid(0.5M) and standardized sodium hydroxide(0.5M). Hypothesis: In this experiment I plan to compare between a set of antacids, which antacid neutralizes the most moles of Hydrochloric acid(0.5 M), as this will help me to establish their relative effectiveness in helping to reduce excess stomach acidity. I am going to use back titration reactions whereby I will place a fixed volume, 25 cm3 of standardized hydrochloric acid, 0,5M, in a conical flask. Then, I shall add the maximum daily dosages of each individual antacid to the hydrochloric acid in the flask. The antacid which is supposed to neutralize some of the excess hydrochloric acid of the stomach, will neutralize some of the excess hydrochloric acid in the conical flask. The number of moles of hydrochloric acid to be neutralized would be 0.0125 moles. I will then neutralize the unreacted hydrochloric acid, if any, using standardized aqueous sodium hydroxide(0.5 M) from a 50 cm3 burette. In order to clearly note the point of neutralization( the equivalence point), I will use phenolphthalein indicator which experiences a colour change from colourless to pink, from acid to base. Using the volume of base needed to neutralize the excess acid, I will be able to calculate the amount of acid neutralized by the individual antacids, hence enabling me to compare their relative effectiveness. The antacids have differing chemical compositions which are shown in the lists below: Eno powder contains sodium bicarbonate which is a weak base. This is the main component which makes the Eno an antacid, however, there is also citric acid in the Eno sachets. Even though Sodium Bicarbonate will neutralize some of the hydrochloric acid in the flask and hence reduce the acidity of the mixture, the high percentage composition of 43.41% in the Eno will reduce the effect of neutralization caused by the Sodium Bicarbonate Base. ...read more.

This problem could be avoided using a digital ph meter. 8. The error on the volume of the Actal Tums was quite high( 4%). This could have affected the outcome of the results. Even though the Actal Tums considering its great performance may have still been the best antacid, the relative effectiveness figure could have been affected by this error. The errors were notably different, that is to say �4.24%,� 0.48% and �0.45%. Improvements 1. In order to correctly know the end-point of the reaction, a digital Ph meter can be used to ensure that the clip of the burette is closed, exactly when the solution in the conical flask is neutral. Similarly, a colourimeter can also be used to accurately follow the colour changes of the indicator and to accurately stop the titration at the neutral point. The addition of hydrochloric acid is stopped when the phenolphthalein indicator just turns from colourless to pink( exactly at the point of equivalence). 2. Perhaps to better find out the effectiveness of the given antacids one could try to bring in to account other factors such as temperature, presence of acidic enzymes. The solid tablets could also perhaps be grinded as this would enable the antacid to be extracted relatively faster as compared to the solid form. 3. The time intervals should also be taken into consideration. Perhaps the trials could also be carried out for different time periods e.g. leaving the antacids for 5 min, 10 min, 15 min before titration. This would help to show whether time really affects the results we have obtained. By doing these experiments, we would also be able to establish which antacid could provide quickest relief. 4. Always ensure that your line of sight is perpendicular to the readings of volumes, you wish to take. This will ensure that your readings and calculated percentages are accurate. 5. Remove the funnel from the burette as soon as the acid had been added. This will prevent any in accuracy in the volume of acid needed for titration. ...read more.