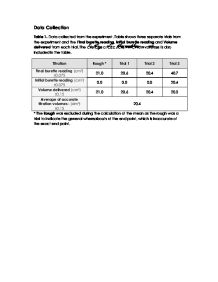 Data Collection Table 1. Data collected from the experiment. Table shows three separate trials from the experiment and the Final burette reading, Initial burette reading and Volume delivered from each trial. The average of accurate titration volumes is also included in the table. Titration Rough * Trial 1 Trial 2 Trial 3 Final burette reading (cm3) �0.075 21.0 20.6 20.4 40.7 Initial burette reading (cm3) �0.075 0.0 0.0 0.0 20.4 Volume delivered (cm3) �0.15 21.0 20.6 20.4 20.3 Average of accurate titration volumes : (dm3) �0.15 20.4 * The Rough was excluded during the calculation of the mean as the rough was a trial to indicate the general whereabouts of the end point, which is inaccurate of the exact end point. Table 2. Observations collected during the experiment. Table contains observations which were recorded during each trial of the experiment. Trials Observations Before trials * When water was added to the crystals of oxalic acid, it dissolved almost instantly with a light stirring of the beaker. Rough * When two drops phenolphthalein was added to the solution of sodium hydroxide, the solution turned pink. * After adding about 20.8dm3 of oxalic acid into the sodium hydroxide solution, while swirling the conical flask, the solution turned completely clear - the oxalic acid was filled up to 21dm3 to have a rounded rough end point to work with. ...read more.

This could be prevented by either slowly removing the funnel or using the funnel up to a certain mark, remove it and fill up to the desired amount with the use of a small pipette - drop by drop. When using the 20mL pipette to transfer the sodium hydroxide into the conical flask, the tip of the nozzle had a drop that was tempted to drop out of the pipette. Avoid touching the sides and move the pipette over the flask slowly would reduce the chances of it dripping out and altering the volume of solution. A small amount of the solution was also stuck at the tip of the nozzle after being emptied. By touching the tip to the side of the flask would help that tiny bit of solution flow out. If possible have the nozzle flat on the side of the flask, this would allow it to flow out smoothly. To avoid or reduce these significant errors, these solutions and improvements should be taken into consideration during future repetition of this experiment. The experiment overall was invalid. Though the values in data collection may have been to a 0.10cm3 difference, the final calculation of the percentage error, 16.87%�1.74%, was much greater than the desired 1% causing the experiment to be invalid. ?? ?? ?? ?? 6 ...read more.