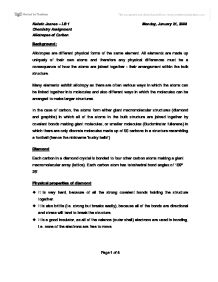 Background: Allotropes are different physical forms of the same element. All elements are made up uniquely of their own atoms and therefore any physical differences must be a consequence of how the atoms are joined together - their arrangement within the bulk structure. Many elements exhibit allotropy as there are often various ways in which the atoms can be linked together into molecules and also different ways in which the molecules can be arranged to make larger structures. In the case of carbon, the atoms form either giant macromolecular structures (diamond and graphite) in which all of the atoms in the bulk structure are joined together by covalent bonds making giant molecules, or smaller molecules (Buckminster fullerene) in which there are only discrete molecules made up of 60 carbons in a structure resembling a football (hence the nickname 'bucky balls') Diamond Each carbon in a diamond crystal is bonded to four other carbon atoms making a giant macromolecular array (lattice). ...read more.

As the sp2 hybridisation results in planar structures, there are giant 2 dimensional layers of carbon atoms and each layer is only weakly linked to the next layer by Van der Waal's forces. Physical properties of graphite: * It is soft and slippery, because of the weak intermolecular forces of attraction, which allow the layers of molecules to slide easily over one another. And so this is why graphite powder is used as a lubricant. * It is also brittle, as the intra-molecular forces (between atoms within the molecules) are stronger than the intermolecular forces (between molecular layers), making it strong and, at the same time, easily breakable. * It is a good conductor of electricity, because only three of the four valence (outer shell) electrons are used in bonding. This means that all carbon atoms within graphite will each have one free electron. All of these delocalized electrons together make graphite a good electrical conductor. ...read more.

Fullerenes are insoluble in water but soluble in methyl benzene. They are bad conductors as the individual molecules are only held to each other by weak van der Waal's forces. Physical properties of fullerenes: * They are soft and slippery, as there are few covalent bonds holding the molecules together, but only weak Vander Waals forces between molecules. * They are also brittle, due to the weak Van der Waal's forces of attraction between the molecular layers. * They are good electrical insulators, because there is no movement of electrons available from one molecule to the next. The exception could be the formation of nano-tubes that are capable of conducting electricity along their length. These are the subject of some experiments in micro electronics * They are insoluble in water, as there are only very weak Van der Waal's attractions between the carbon atoms and the water molecules whereas the carbon atoms are bonded very tightly to one another in the molecules. * And they have low melting points, typical of covalent crystals where only Van der Waal's interactions have to be broken for melting. ...read more.