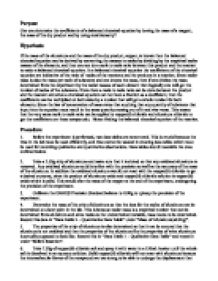 Can one determine the coefficients of a balanced chemical equation by having the mass of a reagent, the mass of the dry product and by using stoichiometry?

In addition spray the copper with water so that any aluminum chloride clinging to the filter paper gets washed down to the bottom. This better isolates the copper, ensuring precision within the experiment. 17. Take note of the qualitative observations of the copper after filtering out the aluminum chloride and solution. This is to ensure that copper truly is the dry product of the reaction. Record all these properties in "Data Table 1 - Qualitative Data Table" and record it under "After Reaction". 18. Lay the filter paper out to evaporate out the water on the copper so that the precision of the experiment is being up-kept. Note that one should only lay it out for approximately twenty-four hours so that the copper does not oxidize. If the copper does oxidize, the mass of the perceived copper would increase and the precision of the experiment would be ruined. 19. After twenty-four hours repeat step 3 and come back and determine the mass of the copper with the filter paper on the OHAUS Precision Standard Weighing balance. This mass will help isolate the mass of the copper in later calculations. Record this mass in "Data Table 2 - Quantitative Data Table" under "Mass of Copper with Filter Paper(�0.01g)". Sample Data Table 1 - Qualitative Data Table Time Qualitative Observations Before Reaction During Reaction After Reaction Sample Data Table 2 - Quantitative Data Table Masses Values Mass of Aluminum(�0.01g) Mass of Copper with Filter Paper(�0.01g) Mass of Filter Paper(�0.01g) Data Collection and Processing Data Table 1 - Qualitative Data Table Time Qualitative Observations Before Reaction � Copper(ii) chloride solution has a teal colour. � It is also liquid and translucent. � Aluminum is a gray, ductile, shiny, solid metal. During Reaction � Solution immediately turns into a very dark green colour with quite a lot of bubbling. � Overtime the part of the aluminum in contact with the solution turns a brick red colour. ...read more.

chloride should be the same as the mass of the copper in the dry product. In addition the the mass of the chlorine in Aluminum chloride should be the same as the mass of the chlorine in the copper(ii) chloride. Finally to find the mass of the aluminum can be found by finding the total mass of aluminum chloride by multiplying the mass of the chlorine by the reciprocal of the percentage of chlorine in aluminum chloride. Then to find the mass of the aluminum one would have to take the percentage composition of aluminum in aluminum chloride and multiply it by this total mass. This then gets the mass of all the compounds you need. This method prevents any of the error that would result from the reaction since no copper is lost during this reaction and this also prevents the error from copper oxidizing or copper being dropped since the copper is never given the chance to react. In addition this process involves very little error since percentage composition is a known, definite, empirical amount with a negligible uncertainty and only the copper(ii) oxide actually has significant uncertainty. If one wants to resolve the issue of the vigorous reaction of copper(ii) chloride, one could simply turn down the heat so that the reaction is not as vigorous. In this case, heating a substance during a reaction will just lead to an increased rate of reaction. However, if the temperature is reduced, then the reaction will occur more slowly but the risk of losing the copper is reduced. If one wants to resolve the issue of the oxidization of the copper then one could simply watch over the copper or come at an earlier time(i.e: the morning) so that the amount of copper that has oxidized is minimized. The evaporation of the water on the copper would not take 24 hours, realistically it would probably only need 1 or 2 hours to occur. After these one or two hours one could come in to the lab and mass the copper. This ultimately minimizes the amount of oxidized copper. ?? ?? ?? ?? ...read more.