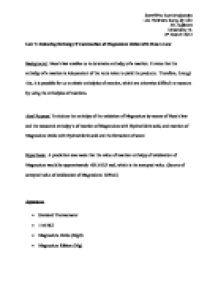 Therefore, the Hypothesis proved to be correct, since we got an almost close value. Evaluation: The almost perfect results with a 0.46 % error in this experiment can proved to be a great result for the determination of enthalpy of oxidization of Magnesium. Numerous errors could have been affected the results achieved in this experiment. The likeliness of heat loss from the probe itself and heat loss into the system could affect the enthalpy of reaction of MgO and Mg with HCl. Another error could be that the specific heat capacity used was for water when in the liquid was solution had other impurities in it, which could have resulted in the slightly off results. These errors could be avoided in other experiments by making use of an insulated cup and by considering the proper specific heat capacity of solutions used in the experiment. The lab also faced the plight of not being experimented under standard conditions. ?? ?? ?? ?? Samhitha Kumbhajadala Lab Partners: Sung Jin Kim Mr. Kuijlaars Chemistry HL 3rd March 2012 ...read more.