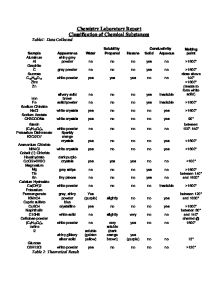 o Metal is non-polar in nature, so according to the like-dissolves-like rule, it is insoluble in the polar propanol. o Metals have relatively high melting points as there are many van der Waals' forces between molecules, and there are strong metallic bonds between positive ions and the electron sea. o The electrical conductivity of metals originate from the fact that in the metallic bond, the outer electrons of the metal atoms form a gas of nearly free electrons, moving as an electron gas in a background of positive charge formed by the ion cores. These free electrons allows electric conduction to occur, as they are attracted to the positive pole. * Molecular Substances o Molecules are made of fixed numbers of atoms joined together by covalent bonds, and can range from the very small (even down to single atoms, as in the noble gases) to the very large (as in polymers, proteins or even DNA). All sugars and acids are molecular. o Most molecular substances are insoluble (or only very sparingly soluble) in water. Those which do dissolve often react with the water, or else are capable of forming hydrogen bonds with the water. o Sucrose and glucose, as exceptions, dissolve in water, because water is covalently bonded (non polar) but it has a positive and negative end region (polar). ...read more.

* Macromolecular Substances o Macromolecular is a large molecule made up of a large numbers of atoms, comprised of at least one-hundred atoms. Macromolecules may also be referred to less specifically as polymers. o It is not soluble in propanol, water or hexane as the covalent bonds in between molecules are much stronger than the attractive forces of water. o It does not conduct electricity mostly because there is no free electrons available. But for graphite, it can conduct electricity due to the vast electron delocalization within the carbon layers. These valence electrons enable it to conduct electricity. However, the electricity is only conducted within the plane of the layers. o The melting points of macromolecule tends to be high as there are many covalents bonds in between molecules, and thus a large amount of energy is needed to change its state Points to Improve * The obtained melting points of molecules varies a lot from the theoretical results * Some of the samples cannot be melt by the Bunsen flame, which temperature is too low * Some of the samples is insoluble, thus the result of aqueous conductivity cannot be obtained Improvements * Performing the experiment multiple times can increase accuracy of results * More accurate temperature measuring instruments can be used. * A flame of higher temperature can e used to melt the samples and find the actual melting point. ...read more.