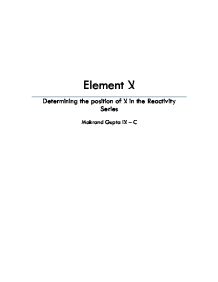 Determining the position of unknown element X in the Reactivity Series

Dependent Whether a reaction takes place or not When different metal compounds are used, it is not necessary that a reaction takes place every time. The occurrence of a reaction depends on the metal present in the compound used. Energy Change (?E) ?E depends on the compound used. In different compounds there are different types of bonds present and also every bond has a different energy level. Enthalpy Change (?H) ?H depends on ?E. If ?E is -ve, then the reaction is exothermic; if ?E is +ve, then the reaction will be endothermic. Controlled Volume of the Metal Compound taken The volume of the metal compound taken must be kept constant as varying volumes can affect the final temperature. Size of Element X strip The size of the strip of Element X must also be kept constant as varying lengths can again affect the final temperature. Apparatus 1 Strip of Element X 7 Test tubes 5ml of CuSO4 5ml of FeSO4 5ml of MgSO4 5ml of PbNO3 5ml of KSO4 5ml of AgNO3 5ml of ZnSO4 Procedure 1. ...read more.

This means that element X is Sn; because the reactivity series goes as follows: K, Na, Ca, Mg, Al, Zn, Fe, Sn, Pb, Cu, Ag, Au. Compound Chemical Equation Energy Equation ?E KSO4(aq) - - MgSO4(aq) - - ZnSO4(aq) - - FeSO4(aq) - - Pb(NO3)2(aq) CuSO4(aq) AgNO3(aq) As I stated in my hypothesis, that the further apart the elements are (in the Reactivity Series) the lower the ?E is. This means that the reactions are more apparent (vigorous) and also more heat is produced in such reactions. Conclusion From this experiment, I conclude that the Element X given to me is below Iron and above Lead in the reactivity series i.e. the element is Tin. I also conclude that the further apart the elements are (in the Reactivity Series) the higher the ?H and lower the ?E. I also conclude that such reactions are more reactive (apparent) as compared to those between element with a lower number of elements between them. Evaluation In this experiment, if the mass of element X would have been measured and then used for reactions the reactions would have been more accurate and reliable. ?? ?? ?? ?? ...read more.