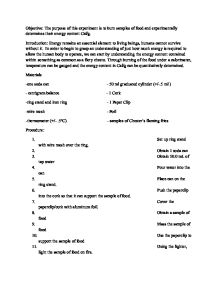 Objective: The purpose of this experiment is to burn samples of food and experimentally determines their energy content Cal/g.

Introduction: Energy remains an essential element to living beings, humans cannot survive without it.  In order to begin to grasp an understanding of just how much energy is required to allow the human body to operate, we can start by understanding the energy content contained within something as common as a fiery cheeto. Through burning of the food under a calorimeter, temperature can be gauged and the energy content in Cal/g can be quantitatively determined.

*In order to calculate Theoretical energy content 1 oz was considered to be approximately 28.35g

The purpose of the Energy Content of Snack Foods lab, was to determine, experimentally the energy content of Chester’s hot fries in Cal/g. During the lab, 5 trials were conducted and quantitative data was gathered from each trial. Through the course of the experiment qualitative data was collected as well. Such observations include the fact that the cheetos changed from their flaming red color to a burnt black color accompanied by a burnt bread smell. Not only that but when holding the paper clip contraption in order to burn the cheetos without suffering a burn to the data collector, heat could still be felt on the collector’s arms. Since only classroom resources were available, the method used to collect data was chosen as calorimetry using a soda can as the calorimeter. The food was burned underneath the soda can which contained a thermometer inside of it that was gauged through the reaction with a stopwatch up recording every 15 seconds the temperature of the water inside of the soda can up until 75 seconds. 75 seconds was chosen because prior to the lab food was burnt to judge how the lab should be run. It was noticed that it took just over a minute before the food burned out. By collecting temperature every 15 seconds it allows for the data to later be graphed to see if an observable trend appears. Let it be known that throughout the course of the lab, Calories refers to kilocalories and calories refers to regular calories noting that the sole difference between the two is the capitalization of the first “c”.

The main calculations performed in this lab were preformed with the intent to calculate the energy content in Cal/g of Chester’s flaming hot cheetos. To do this, the equation necessary was “q=mcΔt”: the “q” representing the energy content of the reaction in Joules, “m” representing the mass of the water inside the can which was further assumed that no water was lost throughout the course of the reaction leaving the mass unchanged for the water , “c” being the specific heat of water, and “Δt” being the change in temperature of the water inside the can in Celsius. In order to fully implement this formula, the mass and change in temperature were computed for each trial using the raw data. Averages were not calculated because since the starting temperature wasn’t kept constant, graphing would have been less significant since for most of the trials, the change in temperature was 3. However the average actual energy content ( Cal/g) was calculated. Even though the masses of the cheetos varied, in accordance to size they appeared the same. Instead of losing time to achieving cheetos of the same weight, visual evaluations were accepted since calculations were per a gram eliminating the need for all the cheetos to be the same weight. In order allow for better analysis, it was decided that each trial was to be graphed separately and then the overall trends would be compared between the 5.

As a result of computing the raw data for five trials individually, a line of best fit was drawn for each graph. Each trial produced a line of best fit with a positive slope which shows that at least for the first 75 seconds, the amount of energy gained from food only increases proportionally with the change in temperature. Furthermore, although the equation used provided an answer in Joules, the nutrient information on the back of the package was found in Calories per ounces and so upon converting the nutrition information to Calories per gram, it was decided that in order to better assess the energy content of food in relation to relatable terms such as nutrition information common to most people, the Joules were to be converted to Calories per gram as well. Since doing so required so many different conversions such as Joules to  calories to Calories to Calories per gram, instead of observing normal significant figure rules, the final Calories per gram was recorded to three significant figures instead of one significant figure to allow a better gauging of the data. The average actual energy content of the food was .001019 +/- 40% Calories per gram. The average theoretical energy content of food ( Cal/gram) was also calculated since there each trail had a slightly different theoretical value as well calculated to 2.55 (Cal/g). The average actual calories per gram even within 40 % percentage uncertainty plus or minus of the value is still well beyond the theoretical value which helps to explain the large amounts of percent error calculated later in the lab. Every single percent error calculation was at least, if not more, greater than -99 % which only screams that there definitely exists paths for improving this lab.

One major source of error was the way in which the heat was allowed to reach the calorimeter. Even holding the burning food at arm’s length heat from the reaction could be felt all along the arms of the data collector. This means that heat wasn’t just rising into the calorimeter but a great deal was also moving outward being lost in the air around it. Since heat was being lost to the air that means that it wasn’t going into the calorimeter which significantly affected the error propagation of the lab. The uncertainty for the thermometer is (+/- .5 °C) which normally doesn’t affect the lab too much but since the most temperature ever changed was 5 +/- 1 °C during the calculation that comes  to a 20% error propagation. This is huge for the lab affecting the calculated data from the start of the calculations. This helps account for the large percent error experienced. A great deal of the heat could be explained by the ineffective nature of the lab set up. Another significant source of error was the calorimeter itself, the aluminum soda can had an open top for which to put the thermometer inside of it and while it heats up quickly, it is largely unable to retain the heat for a sufficient amount of time. In fact by the time the reaction had past 75 seconds, it was observed that the soda can had already cooled down again to the point where it became safe enough to touch without pain just seconds after the reaction reached completion. This means that the soda can was able to heat up the water but since it cooled just as quickly, it lost heat as it gained heat making it ineffective as a calorimeter. Additionally the soda can wasn’t of the highest quality either. In fact it wasn’t even new, it had experienced use several times before and was blackened from previous experiments.

In order to improve the lab the calorimeter should be improved. Instead of using old, used aluminum cans, may it be recommended that it be replaced with a Styrofoam cup with a few modifications. First Styrofoam cups insulate relatively well, retaining heat with better success by having the ability to be stacked inside each other. Instead of using a soda can, two Styrofoam cups should be stacked inside each other and then in order to prevent burning, the cups should be wrapped in tin foil to prevent heat from escaping from the top and also preventing the Styrofoam from burning. This will have a positive effect on the calculations because more heat will be retained giving more accurate results as far as change in temperature goes.  Another improvement would be in reducing the heat that is released into the air. Since an entirely closed environment wouldn’t work since flames need oxygen to live, I suggest surrounding the ring stand with a small, relatively inexpensive three panel cardboard display so that air can still reach the flame from one end but at the same time, more heat will reach the calorimeter instead of releasing into the air from all directions. Both of these improvements will vastly improve the percent error because not only will the calorimeter be able to retain more heat but it will also receive more heat that was lost during the previous lab improving the accuracy of results.