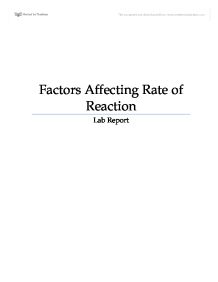 Factors Affecting Rate of Reaction Lab Report TABLE OF CONTENTS SECTION 1 Affect of Surface Area on the Rate of Reaction of Alka-Seltzer In a successful reaction, reactants have to effectively collide with each other. The chance of a successful collision can be increased or decreased by using many factors. This investigation demonstrates how increased surface area leads to an increased rate of reaction. It is expected that the broken surface area of the Alka-Seltzer tablets has the largest surface area and will have the fastest reaction rate. MATERIALS/METHODS * Materials o Safety goggles o 2 Film canisters o 10-mL graduated cylinder o 2 Alka-Seltzer tablets (1.8 g each) o Mortar and pestle o Balance o Stopwatch or timer * Procedure 1. Safety goggles were put on 2. 10 mL of water was measured in the graduated cylinder and the temperature was recorded 3. The water was then poured in the film canister 4. One Alka-Seltzer tablet was crushed using the mortar and pestle 5. The mass of the crushed pieces were measured on the balance and poured into the film canister 6. The lid was then put on firmly on the film canister to close it off to prevent gas from getting in the canister 7. ...read more.

In the experiment, the rate of reaction of water at room temperature was 0.3 g/s and when the water temperature was increased by 49�C, the rate of reaction increased to 0.325, almost twice. These results seem right since according to the collision theory, raising the temperature makes the particles move faster. This means that the particles collide more frequently with each other and the rate of the reaction increases. The stronger the collisions, the easier the chemical bonds break apart and therefore, the quicker the reaction. The rate of reaction of the Alka-Seltzer could have been higher in the heated water. The water was poured in the beaker to measure the temperature by using a thermometer, this took a few seconds. During these seconds, the water had cooled off a little. Also, the accuracy of the time is somewhat questionable since the tablet begins to react from the time it is put in the heated water. However, we only calculated the time from when the cap of the film canister was put on. RAISING TEMPERATURE: We convert the data into rates of reactions because it is more difficult to compare data when they have different units. ...read more.

These packs consist of two compounds- urea and ammonium chloride in separate containers within the package. When the bag is bent and the containers are broken, the two compounds mix together and begin to react. Because the reaction is endothermic, it absorbs heat from the surrounding environment and the bag gets cold. The chemical reaction involved in photosynthesis is: Carbon dioxide + water glucose + oxygen The main factors affecting the rate of photosynthesis are carbon dioxide concentration and temperature. An increase in the carbon dioxide concentration increases the rate at which carbon is incorporated into carbohydrate in the reaction and so the rate of photosynthesis generally increases. This is because increasing the concentration means that there will be more particles in that volume, decreasing the space between the carbon and the carbohydrate particles. Photosynthesis is also dependent on temperature. Temperature speeds up all chemical reactions and photosynthesis is no exception. Photosynthesis requires enzyme activity; enzymes work better in warm conditions. For instance, increasing the temperature from 10�C to 20�C could double the rate ph photosynthesis as the plants enzymes will be at their working temperature. As the temperature increases, molecules in the cells will be moving at a faster rate therefore, they will be colliding with each other more, breaking more bonds and reacting at a higher rate. ?? ?? ?? ?? 3 ...read more.