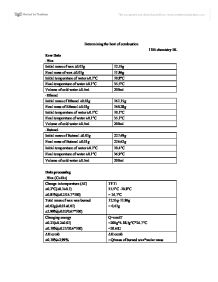 So they are burned and evaporated more after we measure the temperature. Another fact that we should consider is that not only the water was being heated, but also the thermometer, stirring rod and the tin can were also being heated. We should consider that they were also heated, so we should measure how much heat were used to heat them. Also some other heat would have been lost round the sides of the tin can, and from the water to the atmosphere. Due to our room temperature are different from the temperature of water. The good thing that we did in our experiment is that we made some space when we set up the large metal can to surround the candle. As we make some space under the large can by putting some flat cylinder under the can, the candle burned more quickly and well. If we didn't make the space for it, air might stuck in there so it would take more time to reaches up to 35�C. ?? ?? ?? ?? ...read more.