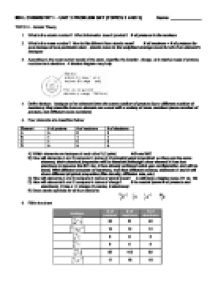 IBHL CHEMISTRY I - UNIT 2 PROBLEM SET (TOPICS 2 AND 3) Name: _____________ TOPIC 2 - Atomic Theory 1. What is the atomic number? What information does it provide? # of protons in the nucleus 2. What is the mass number? How is this different from atomic mass? # of neutrons + # of protons for one isotope of one particular atom - atomic mass is the weighted average mass for all of an element's isotopes 3. According to the most current model of the atom, describe the location, charge, and relative mass of protons, neutrons and electrons. A labeled diagram may help. 4. Define isotope. isotopes of an element have the same number of protons but a different number of neutrons; they describe how an element can occur with a variety of mass numbers (same number of protons, but different mass numbers) 5. Four elements are described below: Element # of protons # of neutrons # of electrons A 5 6 2 B 1 1 1 C 1 0 0 D 5 5 5 A) Which elements are isotopes of each other? (2 pairs) A/D and B/C B) How will elements A and D compare in terms of chemical/physical properties? ...read more.

red, orange, yellow, green, blue, violet 21. a) Indicate the wavelength of each wave in the following wave diagrams. b) Which of the waves has a higher frequency? Wave B c) Which of the waves has a lower energy? Wave A Wave A Wave B 22. As wavelength gets shorter, frequency increases. 23. As wavelength gets shorter, energy increases. 24. Describe the Bohr model of the atom, including the evidence collected that led to its development. Nucleus at center with protons and neutrons; successive energy levels containing electrons surround nucleus. Bohr's model was based upon evidence from line spectra, namely the emission spectrum for hydrogen 25. What is the difference between a bright line spectrum and a continuous spectrum? How do energy levels account for the appearance of bright line spectra? bright line spectra show only distinct, finite colors (not an infinite amount. Continuous spectra show a fully blended rainbow of color with no gaps between. Bright line spectra are produced by electron jumping between energy levels. Since there are only a certain amount of jumps between levels possible, only a certain amount of colors can be produced. This shows up as the bright line spectrum 26. What is the electromagnetic (EM) spectrum? The spectrum of all types of light in the universe (visible and non-visible) ...read more.