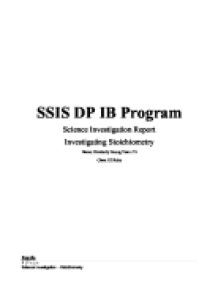 Investigating Stoichiometry - The table shows the mass of reactants potassium iodide and lead(II) nitrate, and the mass of the precipitate from the reaction

SSIS DP IB Program Science Investigation Report Investigating Stoichiometry Name: Kimberly Hoong Yearn Yi Class: H1Ruby Results Quantitative Data: The table shows the mass of reactants potassium iodide and lead(II) nitrate, and the mass of the precipitate from the reaction between KI(aq) and Pb(NO3)2(aq). Mass of precipitate from reaction between KI(aq) and Pb(NO3)2(aq) Mass of potassium iodide (�0.001g) 1.701 Mass of lead(II) nitrate (�0.001g) 1.280 Mass of filter paper (�0.001g) 0.798 Mass of precipitate + filter paper (�0.001g) 2.525 Mass of precipitate (�0.001g) 1.727 Qualitative Data: 1) After pouring the KI(aq) and Pb(NO3)2(aq) solution together into the beaker, a glass rod was used to stir the solution so as to make sure it was mixed properly. However, after stirring, when the glass rod was taken out, there were small amounts of precipitate (PbI2(s)) stuck onto the glass rod, and could not be removed. 2) While pouring the remaining mixture into the filter paper, not all the mixture was poured into the filter funnel and paper. ...read more.

Limitations and Improvements If I could do the experiment again, --> As some of the precipitate was stuck onto the glass rod and could not be removed by using my fingers, I could have just used a little bit of water to wash it down back into the mixture. This would have decrease the difference in the percentage between the predicted yield and the percentage yield. --> Even though water was used to wash some of the mixture into the filter funnel, there was still some mixture stuck in the beaker. The process of using water to wash down the mixture could have been repeated over and over until all the mixture is in the filter funnel. --> After filtrating the mixture once, some of the PbI2 crystals went through the filter paper and into the filtrate in the conical flask. To make sure all the PbI2 precipitate is counted towards the percent yield, the filtrate could have been filtrated again at least 2 more times. This would have increased the mass of PbI2, which would have made the percent yield closer to 100%. ?? ?? ?? ?? 1 | Page Science Investigation - Stoichiometry ...read more.