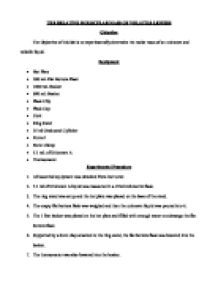 The Objective of this lab is to experimentally determine the molar mass of an unknown and volatile liquid.

THE RELATIVE MOLECULAR MASS OF VOLATILE LIQUIDS Objective The Objective of this lab is to experimentally determine the molar mass of an unknown and volatile liquid. Equipment * Hot Plate * 200 mL Flat Bottom Flask * 1000 mL Beaker * 600 mL Beaker * Flask Clip * Flask Cap * Cork * Ring Stand * 25 ml Graduated Cylinder * Funnel * Buret Clamp * 5.1 mL of Unknown A * Thermometer Experimental Procedure 1. All essential equipment was obtained from instructor. 2. 5.1 ml of Unknown A liquid was measured in a 25ml volumetric flask. 3. The ring stand was setup and the hot plate was placed on the base of the stand. ...read more.

8. Initially a cork was used to seal the cap of the flask, but then, owing to new instructions, the use of the cork was abandoned. 9. The beaker was heated on the hot plate until the liquid in the flask evaporated. 10. After the liquid evaporated, the water in the beaker was allowed to boil for an additional 5-8 minutes before the hot plate was turned off. 11. The flask was removed from the beaker and a cork was used to seal the cap. 12. The flask was then lowered into a beaker of cold water and allowed to completely cool. 13. ...read more.