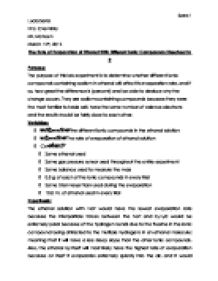 Lucia Serra IB SL Chemistry Mr. McKeen March 12th, 2012 The Rate of Evaporation of Ethanol With Different Ionic Compounds Dissolved In It Purpose: The purpose of this lab experiment is to determine whether different ionic compounds containing sodium in ethanol will affect its evaporation rate, and if so, how great the difference is (percent) and be able to deduce why the change occurs. They are sodium-containing compounds because they were the most familiar to table salt, have the same number of valence electrons and the results should be fairly close to each other. Variables: * Independent: the different ionic compounds in the ethanol solution * Dependent: The rate of evaporation of ethanol solution * Controlled: * Same ethanol used * Same gas pressure sensor used throughout the entire experiment * Same balance used to measure the mass * 0.3 g of each of the ionic compounds in every trial * Same Erlenmeyer flask used during the evaporation * 10.0 mL of ethanol used in every trial Hypothesis: The ethanol solution with NaF would have the lowest evaporation rate because the interparticle forces between the NaF and C2H6O would be extremely polar because of the hydrogen bonds due to the fluorine in the ionic ...read more.

Also, with the help of another person, less time would be lost between pouring the ethanol into the Erlenmeyer flask and getting everything ready before collecting the data, because a couple of seconds passed by before the button was pressed. A good way to control the time so that the trials in each solution were done around approximate times was to have the mass measured out before starting out the experiment so as to be more efficient; another positive thing was that the controlled variables were kept constant throughout the experiment. Something that would help in the future would be to hold more trials, because we can see that with five, proportionately, the difference in some of the trials within each series were very different, and having more reproducible results would give more stable averages. Also, in a more advanced course, creating a vacuum would ensure that there are no other particles in the Erlenmeyer flask besides the ethanol and the solution and also having the same temperature. This is because gases in the air affect the pressure and if they reacted with any of the substances, then it would alter the pressure that the gas pressure sensor collects. ?? ?? ?? ?? Serra ...read more.