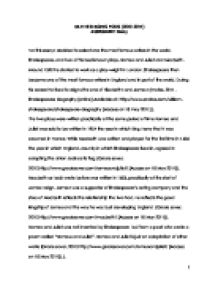 DA1118 STAGING POSTS (2010-2011) ASSESSMENT: Essay For this essay I decided to select one the most famous writers in the world, Shakespeare, and two of his best-known plays, Romeo and Juliet and Macbeth. Around 1590 he started to work as a play-wright in London. Shakespeare then become one of the most famous writers in England and in part of the world. During his career he lived to reigns the one of Elizabeth I and James I (Enotes, 2011. Shakespeares biography.[online] Available at: http://www.enotes.com/william-shakespeare/shakespeare-biography [Access on 18 may 2011] ). The two plays were written practically at the same period of time Romeo and Juliet was said to be written in 1954 the year in which King Henry the IV was crowned in France. While Macbeth was written and played for the first time in 1606 the year in which England, country in which Shakespeare lived in, agreed in adopting the Union Jack as its flag (Grade saver, 2010.http://www.gradesaver.com/romeoandjuliet/ [Access on 18 May 2011]). ...read more.

In Macbeth we can see fate when the three witches gave the prophecy and the audience understands that the main character of the story will die. The conflict although begins to build up when Lady Macbeth persuades her husband to kill King Duncan so that he can become King. Shakespeare decides to include fate also through the weaknesses of the characters for example in Romeo and Juliet when Rosaline tells Romeo that she'd going to stay in convent and Romeo look for Juliet which he thinks is the right women for him. In Macbeth, his weakness is authority and greed and achieves what he wants not only by killing King Duncan but the heir of Macduff and also his friend Banquo. The two plays are set in two different periods of time Rome and Juliet in the 14th century. In the 14th century Europe was expanding very rapidly, there were lots of wars and contrast between countries and probably Shakespeare wanted to demonstrate this by using the two families the Capulets and the Motagues after the 14th century there is a certain period ...read more.

She calls him weak when he hesitates and even assists him in the murders of the king. The love between the two can't be called love because Lady Macbeth not only wants to control Macbeth but she is with him just for power. Another difference of the two plays is that Romeo and Juliet seems a true story why you can clearly see that Macbeth is completely fictional. Shakespeare works a lot on relationships in his plays between couples and I have noticed that in Romeo and Juliet there is not a strong one in the couple while in Macbeth, Lady Macbeth is stronger as a character and manages to control her husband and manipulate him. Shakespeare bases his plays a lot on how the audience expects a play to be and gives them all they want to see, he always takes in count the time period he sets the play in adding features from that period of time (Enotes, 2011. Shakespeares biography.[online] Available at: http://www.enotes.com/william-shakespeare/shakespeare-biography [Access on 18 may 2011]). ...read more.