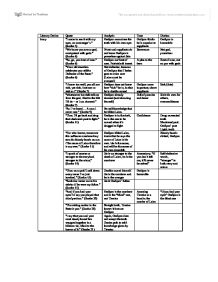 Oediups: An Analysis of Literary Devices

Literary Device Quote Analysis Tone Diction Irony "I come to see it with my eyes, no messenger's." (Roche 5) Oedipus cannot see the truth with his own eyes Oedipus thinks he is superior to suppliants Oedipus is honorable "We know you are no god, omnipotent with gods." (Roche 6) Priest and suppliants do not know Oedipus is powerless against fate Reverence Not god, powerless "So, go, you best of men." (Roche 6) Oedipus not best of men. Patricide & incest. A plea to the hero Best of men, not on par with gods "Your old devotion celebrates you still/as Defender of the State." (Roche 6) Not defender, because of Oedipus that Thebes goes to ruins now (Laius must be avenged) "I know too well, you all are sick, yet sick, /not one so sick as I" (Roche 7) Oedipus does not know how "sick" he is, in that he is double cursed Oedipus more important, above suppliants Sick (fate) "whatsoever he shall tell me from the god, /that to the hilt I'll do - or I am damned." (Roche 7) Oedipus already damned (and damning himself) Full of promise and honor Risk his own for others, overconfidence "So I've heard... A man I never saw." (Roche 9) ...read more.

Jocasta doesn't believe in fate, is praying Advice is bankrupt: afraid for truth Desperate, turning away from chance "How dwindled are the grand predictions of Apollo!" (Roche 51) Ironic she says this, she plays a part in Apollo's predictions. Also, she turns away from prayer immediately Victorious tone, overcome fate "How can a man have scruples/when it's only Chance that's king?" (Roche 52) All fated, Oedipus' demise and her in the prophecies Jocasta's belief in Chance over fate Carefree, light-hearted, catalyst to Oedipus' destruction "Good-bye, my poor deluded, lost and damned!/There's nothing else that I can call you now." (Roche 60) Everyone but the public and Oedipus have realized the truth Lost hope As a mother that abandons her child "I do not blush to own I'm Fortune's pampered child." (Roche 60) Anything but pampered, cursed child. And Fortune refers to Chance, what Jocasta believes in. Jocasta is the mother. Proud "I ordered it to stir again your old delight." (Roche 78) Ironic because those were days that led to his downfall and fulfilling prophecy "Stop this striving to be master of all./The mastery you had in life has been your fall." ...read more.

Alluding to the mountain, mountain represents rise of leader and great fall "The old blind prophet TIRESIAS is led in by a boy" (Roche 17) Archetypal seer, prophet, oracle "Discovered... in a woody mountain dell of Cithaeron" (Roche 56) Mountain, rise to power and quick fall from power - archetypal Metaphors and Similes "A fever-demon wastes the town/and decimates with fire, stalking hated/through the emptied house where Cadmus dwelled." (Roche 6) Describing the disease through the land It's Oedipus' future, stalking hated through the streets Disdain Stalking, unnoticed, Oedipus not known to be murderer "I do not blush to own I'm Fortune's pampered child." (Roche 60) Fortune refers to Chance, what Jocasta believes in. Jocasta is the mother. Foreshadowing ""Here," says the god. "Seek and you shall find./Only that escapes which never was pursued."" (Roche 9) Oedipus not pursued as suspect Oedipus in Thebes "I say you see and still are blind - appallingly" (Roche 23) Oedipus will not see truth until it's too late "In the name of heaven, don't proceed!/For your own life's sake, stop!/And I've been tortured long enough." (Roche 59) Jocasta realized truth, tries to be catalyst for Oedipus back to ignorance ...read more.