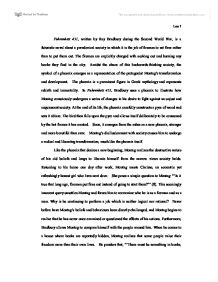 Theme of Phoenix in Fahrenheit 451

Fahrenheit 451, written by Ray Bradbury during the Second World War, is a futuristic novel about a paradoxical society in which it is the job of firemen to set fires rather than to put them out. The firemen are explicitly charged with seeking out and burning any books they find in the city. Amidst the chaos of this backwards-thinking society, the symbol of a phoenix emerges as a representation of the protagonist Montag's transformation and development. The phoenix is a prominent figure in Greek mythology and represents rebirth and immortality. In Fahrenheit 451, Bradbury uses a phoenix to illustrate how Montag consciously undergoes a series of changes in his desire to fight against an unjust and acquiescent society. At the end of its life, the phoenix carefully constructs a pyre of wood and sets it ablaze. The bird then falls upon the pyre and allows itself deliberately to be consumed by the hot flames it has created. Soon, it emerges from the ashes as a new phoenix, stronger and more beautiful than ever. Montag's disillusionment with society causes him to undergo a radical and liberating transformation, much like the phoenix itself. ...read more.

Once these initial doubts set in, they become the driving force or fuel behind Montag's inner transformation. Like the reemergence of the phoenix from the ashes of the pyre, Montag abandons his old beliefs and establishes a newfound respect for the knowledge contained in books. Engaging in a conversation with Faber, Montag's mind is opened up to new ways of viewing the world. When Faber is initially skeptical of Montag's intentions and asks him: "'What knocked the torch out of your hands'" (82), Montag responds, "'I don't know. We have everything we need to be happy, but we aren't happy. Something's missing, I looked around. The only thing I positively knew was gone was the books I'd burned in ten or twelve years. So I thought books might help"' (82). Montag regrets torching the books because he understands that they were concrete things that might have given his otherwise insipid life meaning. The torch he once wielded so confidently has robbed Montag of his identity; however, he chooses to undergo a spiritual rebirth when he acknowledges his past mistakes and confirms his desire never to repeat them. Faber's allusion to the torch, a universal symbol of the spirit and knowledge, serves to exemplify Montag's willingness to undergo this absolute transformation. ...read more.

Like a phoenix, Montag emerges from the city rejuvenated and better prepared to deal with future challenges. In the book Fahrenheit 451, changes in Montag's life take the same path as the phoenix. Eventually, all the evil will become ashes and something beautiful and pure will emerge from it. In the society where Montag lives, he must endure consequences because he wants to be different. His motivations change after meeting Clarisse McClellan and others that challenge Montag's beliefs. This awakens within Montag a desire to question why things are the way they are. In this way, Bradbury makes reference to Montag as a burdened phoenix ready to undergo changes. Montag soon achieves knowledge and wisdom and gains insights into the purpose of life and he undergoes spiritual resurrection like the phoenix. Bradbury compares the phoenix to Montag to illustrate how both of them undergo positive transformation with the usage of fire. By the end, Montag's shift in the view of the world will change how Montag can be seen as someone who has an intense desire to reignite a passion for life just like the phoenix. Bradbury's usage of the phoenix is a representation of Montag's complete transformation from destroyer to preserver of knowledge. Bradbury draws similarities between Montag and the phoenix as a way of illustrating Montag as a dynamic character who goes through positive transformation. ...read more.