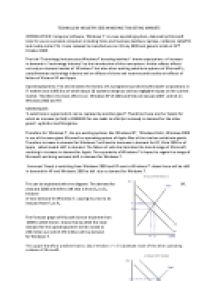 ﻿TECHNOLOGY INDUSTRY SEES WINDOWS 7 BOOSTING MARKETS INTRODUCTION: Computer software, ?Windows 7? is a new operating system, debuted by Microsoft Corp for use on personal computers including home and business desktops, laptops, netbooks, tablePCS and media center PCs. It was released to manufactures on 22 July 2009 and general retail on 22nd October 2009. The title ?Technology Industry sees Windows 7 boosting markets?? shows expectations of increase in demand in ?technology Industry? by the introduction of this new system. Article reflects effects not only on demand market of Windows 7 but also other existing substitute systems of Microsoft?s, complimentary technology industry and on effects of slums and recovery and touches on effects of failure of Vista on XP and Apple. Operating Systems: The article tables the history of 13 programs launched by Microsoft corporations in IT market since 1985.Out of which about 10 systems being too old has negligible impact on the current market. Therefore the main effect is on Windows XP of 2001 and Vista of January 2007 and bit on Windows 2000 and NT. ...read more.

The demand for XP, vista and 2000 will shift to left that is from D1 to D2 because of new demand for Windows 7, causing its price to be reduced from P1 to P2. The Forecast graph of Micosoft licence shipment from 2009 to 2013 theron shows that by 2013 the total demand for the operatng system will be raised to 280 million out which 270 million will be demand for Windows 7. This graph therefore predicts that by 2013 Windows 7 will substitute most of the other operating systems of Microsoft. The "substitutability" is always a matter of degree. ?One good is a perfect substitute for another only if it can be used in exactly the same way?.2 ?And after almost three years in the market, analysts estimate only 10 to 15 percent of enterprises adopted Vista, with rest sticking with XP? shows Vista failed to be proper substitute for XP. Another effect of failure of Vista was tarnishing the brand image, therefore increasing demand of Apple being close/perfect substitute from 5% to 11% in US. ...read more.

?boosting technology industry?. ?The launch of the new operating system coincides with signs of revival of the technology market as companies prepare to replace ageing equipment after delaying new purchases during the worst of the economic slump? 1. Last year the world economy sank into chaos, however this year IBM, Intel, Google all have reported robust profits and Apple posted 9.9 billion revenues. Introduction of Windows 7 with economic recovery, Companies are expected to replace their old PCS increasing the demand for system and PC and related gear as the system is strongly linked to the demand for PCs called a derived demand. T Evaluation: Although this article draws a rosy picture much is to be seen as many things may go wrong with the operating system like viruses, malware which may make performance claims of Microsoft to moot the minds of the customers. Another issue is Windows 7 requires less power and therefore many customers may choose to upgrade their PCs rather than replacing their PCs as it costs only $149. There is also threat from the competitor Apple. Fhil Schiller, Apple?s Senior Vice President says ? Windows 7 is still Windows and there is no guarantee it will be a good experience? ...read more.