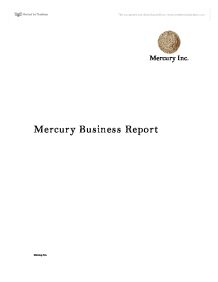 Californias Trade with Mexico. Intra-Industry trade is beneficial to US firms such as Mercury, because it allows for specialization. Mexican factories are able to produce computer parts at cheap prices, and we are able to assemble these and provide spe

Mercury Business Report California's Trade with Mexico History and Need Want Analysis In the last decades, California's trade relationship with Mexico has strengthened immeasurably due largely to the institution of the North American Free Trade Agreement (NAFTA) in 1994. In the 1990s much of the trade between the US and Mexico was intra-industry. This means that two way trade occurred, the US imported electrical parts from Mexico and exported completed electrical machinery to Mexico. In fact, the amount of intra-industry trade between the US and Mexico was 80%1 in the 1990s. In 1999 the leading US export to Mexico was electrical appliances and machinery. Intra-Industry trade is beneficial to US firms such as Mercury, because it allows for specialization. Mexican factories are able to produce computer parts at cheap prices, and we are able to assemble these and provide specific services such as solution services. This needs highly skilled staff such as those Mercury employs. Moreover, the Mexican government programme in the 1990s to encourage modernization of the Mexican computer industry accelerated its growth, increasing the demand for Californian computers. ...read more.

Also, Mexico lacked sufficient foreign reserves to maintain the fixed exchange rate and they were running out of dollars by December. The peso was devalued despite several government assurances. The Mexican economy is the 13th largest in the world and Mexico is the United States third - largest trading partner and second - largest market for US exports. According to NAFTA, the value of Mexican good imports to the US grew from 39.9 billion to 210.8 billion in 2007 which is an increase of 437 percent. Also, the united states is the largest source of FDI in Mexico accounting for over half of the 19 billion. In addition, US companies contribute to around 50 percent of the investment funds in Mexico, this has led to increased efficiency of U.S. domestic production. 1 "U.S.�"Mexico Trade: Sectors and Regions - Business Frontier - FRB Dallas." Federal Reserve Bank of Dallas. N.p., n.d. Web. 11 Nov. 2009. <http://www.dallasfed.org/research/busfront/bus0002.html>. 2 "Exports, Jobs, and Foreign Investment: California." International Trade Administration - trade.gov. N.p., n.d. Web. 11 Nov. 2009. <http://www.trade.gov/td/industry/otea/state_reports/california.html>. "Organization" "Organization" Name of report 2 Name of report 2 Mercury Inc. Mercury Inc. Mercury Inc. Trade with Mexico 6 Trade with Mexico 1 ...read more.