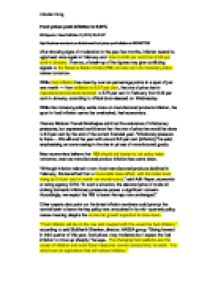 Food prices push inflation to 6.95% BS Reporter / New Delhi Mar 15, 2012, 00:43 IST http://business-standard.com/india/news/food-prices-push-inflation-to-695/467799/ After showing signs of moderation in the past few months, inflation reared its ugly head once again in February and rose to 6.95 per cent from 6.55 per cent in January. Even so, a break-up of the figures may give conflicting signals to the Reserve Bank of India (RBI) on rate cut in its monetary policy review tomorrow. While food inflation has risen by over six percentage points in a span of just one month - from deflation to 6.07 per cent, the rate of price rise in manufactured products declined to 5.75 per cent in February from 6.49 per cent in January, according to official data released on Wednesday. While the monetary policy works more on manufactured products inflation, the spurt in food inflation cannot be overlooked, feel economists. Finance Minister Pranab Mukherjee admitted the existence of inflationary pressures, but expressed confidence that the rate of price rise would be close to 6.5 per cent by the end of the current financial year. "Inflationary pressure is there.... We will end the year with around 6.5 per cent (inflation)," he said, emphasising on some easing in the rise in prices of manufactured goods. ...read more.

However, except for consumer non-durable goods, other sectors did not show much upturn, again giving confused signals to the central bank. Food prices push inflation to 6.95% This article is about a rise in food prices causing inflation in India. Inflation is caused by a number of factors. This essay will determine the causes of inflation and evaluate the appropriate government responses including policies from the Reserve Bank of India (RBI). Inflation is a continuing increase in the general price level. There are mainly two types of inflation: demand-pull and cost-push. Demand-pull inflation is caused by increases in aggregate demand (AD). AD is defined as the total quantity of goods and services spent in a period of time at a given price level. Cost-push inflation is caused by an increase in the costs of production. Based on the article, it mentions both the demand-pull and cost-push inflation. Figure 1 shows the demand-pull inflation and is caused by changing food patterns in India. It can be seen in Figure 1 that an increase in AD shifts AD to the right from AD1 to AD2. This impacts the economy and causes the price level to increase from P1 to P2. AD (aggregate demand) is composed of 4 main components- consumption, investment, government spending and the net export. ...read more.

However, a decrease in the supply of money is necessary to ease inflation. A contractionary policy, as represented in Figure 3, can be used to fill in the inflationary gap caused by the excessive AD in India. Figure 3 shows when the RBI attempting to reduce the money supply through higher interest rates aimed to discourage investment and consumption spending, shifting AD 1 to the left to AD 2. This is so the price level will drop as it intersects the AS curve at the full employment level at real GDP. This contractionary policy has benefits and drawbacks, which affects a number of different people. For domestic firms, a rise in interest rates is disadvantageous as consumption and investment will likely decrease, meaning the demand for firms' products and their efficiency can decrease leading to a decrease in profit in the long run. On the other hand, the contractionary policy will benefit foreign investors, as they are likely to increase the amount of funds into India because as the foreign currency falls, there is an increase in the exchange rate. A higher exchange rate will cause exports to decrease and imports to increase making foreign investors to gain more profit. In conclusion, a balance of fiscal and monetary supply side policies is needed to ensure a steady economic growth in India. Words: 748 ?? ?? ?? ?? Claudia Cheng ...read more.