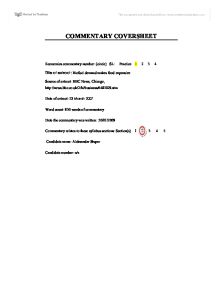 COMMENTARY COVERSHEET Economics commentary number: (circle) SL: Practice 1 2 3 4 Title of extract: Biofuel demand makes food expensive Source of extract: BBC News, Chicago, http://news.bbc.co.uk/2/hi/business/6481029.stm Date of extract: 23 March 2007 Word count: 830 words of commentary Date the commentary was written: 20/01/2009 Commentary relates to these syllabus sections: Section(s) 1 2 3 4 5 Candidate name: Aleksandar Stupar Candidate number: n/a Commentary The article above talks about the increasing demand of corn, because more and more companies that are producing ethanol are demanding corn; since it has been discovered that corn can be used to produce biofuels, such as ethanol. However, this raising corn demand has had also a negative effect, as people who regularly used corn can not afford it's price anymore. There are many determinants which are now affecting the demand of corn, these include prices, rent, multiple uses, and preferences. The prices of corn have now gone higher then they were before, even for normal daily products where corn is involved. For example, now that corn is in high demand the prices on products such as "tortillas" mentioned in the article have gone up. ...read more.

As mentioned before, corn has been used for example to make cereals, animal food, and other things; now, an increase in price will be translated as an increase in the production of such goods that use corn (cereals...etc). (Price of corn rises =costs rise=quantity falls) Thus we have the situation represented in the graph above, as the price rises, the quantity demanded is no longer the same, but it is smaller. For example, if somebody were selling orange juice, and on a really hot day 200 people were wanting orange juice that person can make the price higher, from 1 dollar to 1.5 dollars, now he will have perhaps 150 people, and thus he can decide to make it higher again to 2 dollars, now he will have perhaps 100 people, but he will make a profit even though he needs to squeeze oranges for 100 people. However, it must be considered that as technology improves costs go down, thus we obtain the graph above, which shows us that when costs go down the quantity demanded increases. This means that the rise of corn prices stated above can become favourable once again, by the improvements in technology. ...read more.

And food companies are warning that high corn prices will feed through to everyone's grocery bills. In Mexico, there have been street demonstrations about the rising cost of tortillas, which are made from corn. And rising food costs are unlikely to be the only impact of biofuel refineries buying into the corn market. In places like Illinois, the price of agricultural land has started to rise. That will eventually feed into the cost of other agricultural commodities. Sam Martin puts it succinctly. "I think that cheap food is history," he says. Perverse consequences This trade-off between greener fuels and higher food prices is one of several difficult issues thrown up by the rapid development of the biofuels industry. The world has already witnessed the absurdity of virgin rainforests in Asia being torn down to make way for palm oil plantations. Palm oil, like corn, has become hugely profitable because of demand from biofuel producers. But the environmental benefits of the biofuels are outweighed by the loss of the rainforests. Biofuels can make a contribution to reducing greenhouse gas emissions. But the processes by which they are produced need to be kept under constant review to make sure that they do not have perverse consequences. And that includes forcing up the price of essential foods. ...read more.