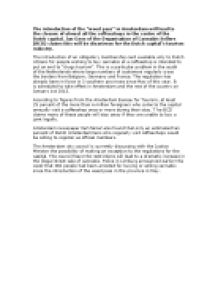 Commentary on the article. The introduction of the weed pass in Amsterdam will lead to the closure of almost all the coffeeshops

﻿The introduction of the ?weed pass? in Amsterdam will lead to the closure of almost all the coffeeshops in the centre of the Dutch capital. Jan Goos of the Organisation of Cannabis Sellers (BCD) claims this will be disastrous for the Dutch capital?s tourism industry. The introduction of an obligatory membership card available only to Dutch citizens for people wishing to buy cannabis at a coffeeshop is intended to put an end to ?drugs tourism?. This is a particular problem in the south of the Netherlands where large numbers of customers regularly cross the borders from Belgium, Germany and France. The regulation has already been in force in 3 southern provinces since May of this year. It is scheduled to take effect in Amsterdam and the rest of the country on January 1st 2013. According to figures from the Amsterdam Bureau for Tourism, at least 25 percent of the more than 6 million foreigners who come to the capital annually visit a coffeeshop once or more during their stay. ...read more.

The social cost of consuming cannabis is generally seen higher than the private cost of consuming cannabis. When a situation such as this occurs there is no potential welfare gain, as a matter of fact, there is a potential welfare loss. This is best illustrated by the usage of the graph shown in Figure 1. It shows that when the MSC is higher than the MPC at any given point there is a loss in welfare as highlighted in the graph. A potential loss in welfare often results in market failure. One of the striking elements in this article is that due to the newly implemented legislation around the consumption of cannabis the demand will tremendously depreciate. Not only will tourists be unable to purchase weed legally, also, as the article states, only an estimated 10 percent of the people that visit a coffeeshop regularly would be willing to register as official members. Translated into economic terms this would mean that while the supply would at first stay the same, the demand curve would shift to the left. ...read more.

When something like this occurs you can assume that it brings violence along because the law does not bind this industry because they are an illegal market already. The question remaining is whether the potential loss in welfare here is greater than when the weed pass isn?t applicable. To determine whether the implementation of the weed pass and its regulations surrounding it is a good or a bad thing, all perspectives from the stakeholders should be taken into account. There can be noticed that only the government and society have big externalities, both positive and negative. The government will lose money on the taxes and the prosecution of illegal dealers. But however they will get rid of most of the drug tourists going to Holland. The society will be affected both positively as well as negatively. There are less drug tourists, which may bring more ease to some lives, but however will recognize the increase in the black market and will be affected by this. To discuss whether the weed pass should be implemented entirely depends on whether the negative externalities of the black market can weigh up to the ones of the consumption of cannabis. ...read more.