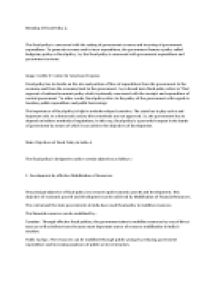 3. Reduction in inequalities of Income and Wealth Fiscal policy aims at achieving equity or social justice by reducing income inequalities among different sections of the society. The direct taxes such as income tax are charged more on the rich people as compared to lower income groups. Indirect taxes are also more in the case of semi-luxury and luxury items, which are mostly consumed by the upper middle class and the upper class. The government invests a significant proportion of its tax revenue in the implementation of Poverty Alleviation Programmes to improve the conditions of poor people in society. 4. Price Stability and Control of Inflation One of the main objective of fiscal policy is to control inflation and stabilize price. Therefore, the government always aims to control the inflation by Reducing fiscal deficits, introducing tax savings schemes, Productive use of financial resources, etc. 5. Employment Generation The government is making every possible effort to increase employment in the country through effective fiscal measure. Investment in infrastructure has resulted in direct and indirect employment. Lower taxes and duties on small-scale industrial (SSI) ...read more.

10. Development of Infrastructure Government has placed emphasis on the infrastructure development for the purpose of achieving economic growth. The fiscal policy measure such as taxation generates revenue to the government. A part of the government's revenue is invested in the infrastructure development. Due to this, all sectors of the economy get a boost. 11. Foreign Exchange Earnings Fiscal policy attempts to encourage more exports by way of Fiscal Measures like, exemption of income tax on export earnings, exemption of sales tax and octroi, etc. Foreign exchange provides fiscal benefits to import substitute industries. The foreign exchange earned by way of exports and saved by way of import substitutes helps to solve balance of payments problem. Conclusion On Fiscal Policy ? The objectives of fiscal policy such as economic development, price stability, social justice, etc. can be achieved only if the tools of policy like Public Expenditure, Taxation, Borrowing and deficit financing are effectively used. Though there are gaps in India's fiscal policy, there is also an urgent need for making India's fiscal policy a rationalised and growth oriented one. The success of fiscal policy depends upon taking timely measures and their effective administration during implementation. ...read more.