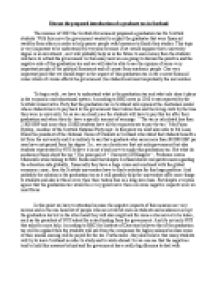 Discuss the proposed introduction of a graduate tax in Scotland

﻿Discuss the proposed introduction of a graduate tax in Scotland The summer of 2007 the Scottish Government proposed a graduation tax for Scottish students .With this move the government wanted to exploit the graduates that were financial wealthy from others in order to help poorer people with bursaries to finish their studies .This topic is very important to be understood by everyone because if we would suppose that a university degree is an investment , as it will probably help us in the future to earn money then the students will have to refund the government .In this essay now we are going to discuss the positive and the negative side of this graduation tax and we will also be able to see the opinion of some very important people of the political firmament and of course from academic people .One very important point that we should target is the impact of this graduation tax in the current financial crises which of course affects the government ,the students and most importantly the universities . ...read more.

Liam Burns the president of the National Union of Students in Scotland who stated that students benefit a lot from the university and it is unlikely to say that a graduate who earns more than 30.000 GBP per year have not gained from his degree .So , we can clearly see that not only government but also students represented by NUS believe it is not a bad move to apply this graduation tax .But what do academics think about the tax ? The principal of '' University of Glasgow '' , Professor Anton Muscatelli while talking to BBC Radio said that despite Scotland shows competitiveness regarding the education side globally , financially they have a huge crisis and combined with the global economic crisis , then the Scottish universities have to find a solution for this huge problem .And probably the solution is the graduation tax as it will possibly help the universities offer more things to students and also ...read more.

many students will try to leave Scotland in order to study and to work abroad .So we can see that the negatives tend to hold this measure behind and the government has a really big dilemma to deal with . ________________ In conclusion , we have to accept that graduation tax will be a very smart move if applied as it is going to help the government , the students and also the universities to pass this big economic crisis .During this essay we saw politicians , academics ans also people who represent the students who agreed about this measure and find it really positive and there were also groups such as the Institute of Directors which stated that the negative impact is bigger than the positives .It was also reported from the president of NUS that students will only accept this measure only , if some other changed will take place , such as public funding . 792 Words ...read more.