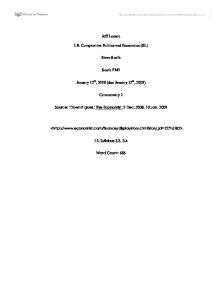 Jeff Leeson I.B. Comparative Politics and Economics (SL) Steve Smith South PM3 January 12th, 2009 (due January 12th, 2009) Commentary 2 Source: "Down it goes." The Economist. 2 Dec. 2008. 10 Jan. 2009 <http://www.economist.com/finance/displaystory.cfm?story_id=12716182>. I.B. Syllabus 3.3, 3.4 Word Count: 686 Down it goes In this article, The Economist talks about how the price for a barrel of oil has dropped below the fifty dollar mark, resting at $47.36. Though many people would be happy with this, it talks about how this could be cause for alarm as a possible indicator for a worsening economy. The main economic concept described in the article would have to be consumption because it ties in with many changes that will occur as an effect of oil prices going down. ...read more.

Consumer confidence also plays a role in consumption and especially in this case because, if consumers believe that gas prices will become lower, then they will have a greater chance or spending more on various goods and services. * Aggregate Demand: Changes in any of the four determinants of aggregate demand will shift it, making it lower or higher depending on which way the determinant shifts. In this case, a graph of aggregate demand would be shifting to the left because price levels are going down as the cost of oil is decreasing. * Monetary Policy: Though not discussed to a deep extent in the article, it does say that in response to the price for a barrel of oil dropping "those setting monetary policy have had no hesitation in cutting interest rates dramatically." ...read more.

In terms of completeness of this article, I think The Economist does an overall decent job at explaining what was going on and what could come of it but I don't think it really touched on what we should do (or what we are doing) as a country to prevent a shortage of oil. I think the article does a good job of assuming that, although we are pursuing renewable energy, oil will be with us for a while longer and that we need to jack up the prices to reduce demand so that we don't have the shortage too soon. In the short term, the lowering of oil prices is immensely beneficial because it increases the amount of money consumers have to spend on goods and services, and it also increases consumer confidence, making them want to get loans and mortgages. ...read more.