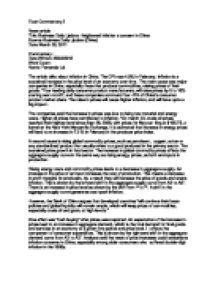 Econ commentary. The article talks about inflation in China. The CPI rose 4.9% in February.

Econ Commentary 2 News article Title: Business Daily Update: Heightened inflation a concern in China Source: Business Daily Update (China) Date: March 28, 2011 Commentary: Date Written: 25/03/2012 Word Count: Name: Fernanda Lai The article talks about inflation in China. The CPI rose 4.9% in February. Inflation is a sustained increase in the price level of an economy over time. The main cause was major companies in China, especially those that produce commodities, raising prices of their goods. "Four leading daily consumer product manufacturers, will raise prices by 5 to 15% starting next month", and these companies command four-fifth of China's consumer product market share. The raise in prices will cause higher inflation, and will have quite a big impact. The companies said the increase in prices was due to rising raw material and energy costs. Higher oil prices have contributed to inflation. ...read more.

There is an increase in price level as shown by the shift from P to P'. A shift in the aggregate supply curve generates cost-push inflation. However, the Bank of China argues that developed countries "will continue their loose policies and global liquidity will remain ample, which will keep prices of commodities, especially crude oil and grain, at high levels." One effect was "rush buying" after prices were reported. An expectation of the increase in prices lead to an increase in aggregate demand, which is the total demand for final goods and services in an economy at a given time period and price level. It affects the component of consumer expenditure. This is shown by the rightward shift in the aggregate demand curve from AD to AD'. Analysts said the news of price increases could exacerbate inflation concerns in China, especially among older consumers who suffered double-digit inflation in the 1980s. ...read more.

It is estimated that it takes 18 months for interest rates to take effects, therefore it is hard to control inflation only through interest rates. Also some sections of the economy are not affected by high interest rates. However, inflation can cause a reduction in the in the real value of savings, this means that the rate of interest does not compensate for the increase in general price level. Additional Comments: You could say that the government could employ supply-side policies. As in subsidize production, and train workers to improve their efficiency. This will increase AS and reduce price level. LNOG TERM AND SHORT TERM leakages have increased. growth of inflation contractionary monetary policies [u1]Define AS for more marks in one of the criteria (forgot which one!) [u2]You can also say that it will reduce consumer spending. Consumer spending is a component of AD. AD = Consumer spending + Investment + Government Expenditure + Export - Import. Hence, fall in consumer spending will cause AD to shift to the left. So, price level will go down. ?? ?? ?? ?? ...read more.