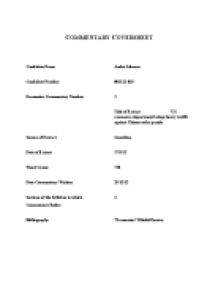 Economics Article Commentary - The article deals with the raise of a tariff on Chinese solar panels and their impacts on the market, as well as general tensions between the U.S. and China.

ï»¿COMMENTARY COVERSHEET Candidate Name André Libeaux Candidate Number 001122-025 Economics Commentary Number 3 Title of Extract US commerce department brings heavy tariffs against Chinese solar panels Source of Extract Guardian Date of Extract 17/5/12 Word Count 730 Date Commentary Written 25/12/12 Sections of the Syllabus to which 3 Commentary Refers Bibliography “Economics” Blink&Dorton ________________ US commerce department brings heavy tariffs against Chinese solar panels Investigation finds China kept prices low with subsidies, but some in US warn tariff will slow adoption of solar energy The Obama administration imposed heavy tariffs on Chinese solar panels on Thursday, after finding that China is flooding the market with government subsidised products. The preliminary decision, that China had dumped solar products on the US for less than the cost of manufacture, will result in tariffs of between 31% and 250% on Chinese imports. It was seen on Thursday as a mixed blessing. US solar panel makers, who brought the original complaint, are expected to benefit. But the tariffs, by forcing up prices, are expected to slow the adoption of solar power more generally. There were also fears the move could lead to a broader US-Chinese trade war. In its decision, the US commerce department said it would impose tariffs of about 31% on about 60 Chinese solar panel exporters which participated in the investigation, including Wuxi Suntech and Trina Solar. ...read more.

The article deals with the raise of a tariff on Chinese solar panels and their impacts on the market, as well as general tensions between the U.S. and China. A trade war is implied to be on the rise. The situation is, ?that China had dumped solar products on the US for less than the cost of manufacture, will result in tariffs of between 31% and 250% on Chinese imports.?(line 5-6) . The industry in the U.S. is protected because of ?? the advantage they have had as a result of their illegal trade practices," (line 24-25) As shown in Diagram 1, price increases from P to P+t, The share of the market from domestic producers increases from Q1 to Q3, shown by revenue g to a+b+c+g+h and the imported share decreases from Q2Q3 to Q3Q4 shown by a revenue decrease from h+i+j+k to i+j. US Government revenue of this tariff is d+e and there is a dead-weight loss of welfare, as consumer surplus f is lost. World efficiency decreases by c, due to less efficient competitors producing a greater share of the Quantity supplied to the market, which is a misallocation of resources, hence undesirable. ...read more.

factor, both spend their resources on this trade war, which is simply inefficiency and a misallocation of resources, hence a big threat to sustainability, because this trade war could in several years not only be about solar panels but a whole range of products, which affects a great number of people, seeing that the U.S. and China are the two biggest economies. This trade war is further reinforced by China wanting ?to take America to the international trade court or WTO? (line 35). So rather than producing what both countries have comparative advantages in, the U.S. commerce department tries to save a ?sunset? industry, as the demand in Europe declines and Chinese competitors produce at prices lower than the manufacturing cost. Concluding, both governments work against with counter-veiling protectionist measures, which must be critically evaluated as they slow down the economy. Although the U.S. can save more market share for them by using the measures, a lot of efficiency is lost and the resources could be allocated into sectors with comparative advantage, hence a problem of economic structure, as inefficient producers should close down. More importantly it is a threat to environmental sustainability, as it hinders the adoption of ?green energy? with higher prices,?precisely at the moment that solar power is becoming competitive,". (line 37-38). ...read more.