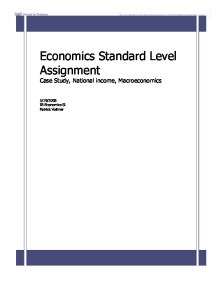 Economics Standard Level Assignment Case Study, National income, Macroeconomics 5/19/2008 IB Economics SL Patrick Vollmer Outline of Content of this Package: 1. Case Study 2. Overhead- Introduction to Macroeconomics 3. Measuring National Income 4. Summary IB Economics Companion - p.147-157 5. The Good, The Bad & The Economist- p.304-325 6. National Economic Performance Sheets with questions 7. National Income Statistics 8. National Income Overhead 1) The Case Study - "rise of the Gulf" The article "Rise of the gulf" which is an extract of the magazine "the economist" is based on the condemnation and recommendation for the oil rich nations that are allocated at the Arabian Gulf. It portrays the path on which the Gulf nations rely too profoundly on their oil supplies and are founding their economy on the growth of the global oil market. The difficulty that occurs by this resource allocation is that changes in the value of a commodity (specifically oil) then directly affects the economy of the nation. Though oil is constant at present, oil cannot last forever and the great economical surplus that these oil rich nations have could disappear if oil where to decrease or finish. For most of the oil relying nations, the great prosperity has proven more of a irritation than a blessing as the large sums of capital have not been repretiated into the economy but rather kept for a selected small amount of individuals who have become tremendously wealthy. A major problem lay within the governments themselves, where they have taken all the spoils leaving the rest of the population with nothing. This unequal ditribution has the result that only a small amount of the population of the Gulf Countries have actually seen the wealth that the oil has generated. The Gulf has started to grow and learn from their mistakes, realising that a a more freemarket economy will benefit the society and that they need to repreiate into their economies. ...read more.

It also includes unrecorded activity that is legal but people are doing it illegally for example foreign workers without work permissions. It also includes work that is not recorded because people want to evade paying taxes, f.e cigarettes. High indirect and direct taxes, along with government health and safety regulations, give employers the incentive to avoid the official economy and hire workers unofficially. Percentage of hidden economy is measured in percentage of the GDP. Countries with higher tax burdens have a higher amount of hidden economic activity. * External costs: GDP figures do not take into account the costs of resource depletion. Cutting down trees leads to an increase in GDP, but there is no measure to account for the loss of these trees. * Other quality of life concerns: GDP may grow if people work longer and more. While people earn higher incomes as a result, they might not enjoy higher standards of living. GDP accounting does not include volunteer work * Composition of output: Large part of country's output might not benefit consumers, such as defense goods and capital goods. If this is the case, then it would be hard to argue that a higher GDP will raise standards of living. 5)The Good the Bad & the Economist 3.1 Measure National Income P.304-325 Economic activity in an economy is commonly measured by gross domestic product (GDP) and gross national product (GNP). Circular Flow of Income Assuming a 'two person economy' as above, we see that total expenditure equals income (in money terms) which equals output. As a result of how we define expenditure, income and output in national income accounting, the three flows resulting from the simple economic transaction above are per definition identities, i.e. E=O=Y. The Circular Flow in a simple two-sector economy Households and firms - no financial institutions, government or other countries exist. The flows involved are shown in figure 3.1.1. ...read more.

* It does not take account of what is produced - one economy might be producing capital goods, which involves less consumption now but should lead to more future income; another might be producing consumption goods which involves high levels of consumption today but less in the future. * There are problems comparing over time, e.g. the price of videos and personal computers has gone down over the years. This might reduce the value of national income, even though the quality of the goods and the number of features has improved * Economic "bads" can increase the figure even though the 'quality of life' has fallen, e.g. a traffic jam causes more consumption of petrol and increases output and income of the country. * Valuation problems, e.g. some output such as defense or the health service does not have market price; the value of these services is assumed to be the cost of providing them, which may over or under-value them * The quality of life: if we take longer holidays or work fewer hours, output and income may fall but we may enjoy life more; similarly, tougher restrictions on pollution might reduce output but increase the quality of our lives Other indicators of standard of living Given the problems using national income figures to compare standards of living between countries or over time some commentators use other indicators, such as number of doctors per 100 populations, adult literacy, and life expectancy. Net Economic Welfare (Tobin and Nordhaus) Measure of economic welfare; adjusts GNP by deducting economic 'bads' (e.g. pollution) and adding value of non-marketed activities (such as barter) and the value of leisure. Lorenz curve This illustrates the distribution of incomes in an economy, e.g. in the diagram 30%of the families in the country have only 15% of the income. The gini coefficient measures the income equality by measuring the area between absolute equality and the line of actual distribution of income. The bigger this area, the more unequal the distribution. ...read more.