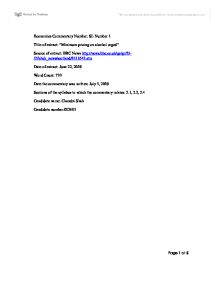 Economics Commentary Number: SL Number 1 Title of extract: "Minimum pricing on alcohol urged" Source of extract: BBC News http://news.bbc.co.uk/go/pr/fr/-/2/hi/uk_news/scotland/8111643.stm Date of extract: June 22, 2009 Word Count: 733 Date the commentary was written: July 5, 2009 Sections of the syllabus to which the commentary relates: 2.1, 2.2, 2.4 Candidate name: Chandni Shah Candidate number:002605 Minimum pricing on alcohol urged Scotland should become one of the first countries to introduce minimum pricing for alcohol, it has been urged. An alcohol summit in Edinburgh discussed the scale of the country's alcohol problem and possible solutions. The forum brought together about 100 representatives from across the political spectrum, the alcohol industry and interest groups. A World Health Organisation expert urged Scotland to lead the world in pricing policy. The event comes in the wake of the Scottish Government's publication of its Alcohol Framework in March. Dr Harry Burns, Scotland's chief medical officer, who attended the summit, said: "The health profession is seeing the fall-out of alcohol misuse every year in hundreds of thousands of GP consultations, thousands of hospital admissions and increased rates of chronic illness and deaths. ALCOHOL MISUSE IN SCOTLAND ? 2007-08: 42,430 alcohol related discharges from hospitals ? 2008: 49% of all Scottish prisoners said they were drunk at the time of their offence ? ...read more.

Labour's Cathy Jamieson said her party wanted to see measures which get to the heart of Scotland's drinking. She said: "We need a national consensus to tackle Scotland's hard drinking culture and I am pleased that the Scottish Government agreed to Labour's request for an all-party summit on alcohol abuse. "Labour has put forward proposals for a ban on billboards advertising alcohol near schools and a mandatory code of practice for retailers, but we will look seriously at any credible proposals that will reduce the level of problem drinking in Scotland." The Liberal Democrats said minimum pricing would not tackle deprivation levels that are at the heart of the challenge of alcohol abuse, while the Conservatives also said no pricing plan would make a significant difference without understanding why people drink to excess. Story from BBC NEWS: http://news.bbc.co.uk/go/pr/fr/-/2/hi/uk_news/scotland/8111643.stm Published: 2009/06/22 16:45:49 GMT (c) BBC MMIX The article is about the government of Scotland planning to put a minimum price on alcohol in the country. It has been brought to the notice of the government that majority of crimes are caused due to alcohol and there has also been many other kinds of misuse. They feel that putting a minimum price on alcohol would help decrease the sales and help strengthen the economy more by decreasing the amount of problems caused by it. ...read more.