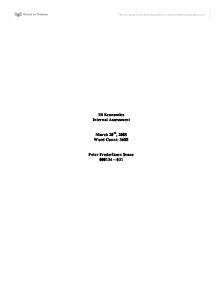 IB Economics Internal Assessment March 20th, 2008 Word Count: 3688 Peter Frederiksen Svane 000134 - 031 Commentary number #1 Title of extract "Japan's chopstick dilemma" Source of extract http://www.atimes.com/atimes/Japan/HJ17Dh01.html Date of extract November 1st, 2006 Word count 740 Date the commentary was written November 3rd, 2006 Syllabus sections Section 1 Candidate name Peter Frederiksen Svane Candidate number 000134 - 031 The article, enlightening the effects of a rapidly increasing price (up to 30%) in the Chinese production of chopsticks, is a great example of how the hidden forces of supply and demand exerts its forces and thereby balance out the market to find its equilibrium. The increase in the price of Chinese chopsticks comes after a greater concern and rising production costs in its market. Providing almost 98% of Japan's chopsticks, China's decision to boost up the prices has a great impact on the regular Japanese consumer. Free chopsticks at restaurants, convenience stores, etc. have been the norm in Japan; people have simply taken it for granted. Nevertheless, the Japanese consumers and importers can no longer ignore the fact that the price of Chinese chopsticks is rising. They will have to respond to this minor crisis. As mentioned, greater concerns about the deforestation and an actual increase in the production cost of chopsticks have lead to a significant decrease in the supply of Chinese chopsticks. In Diagram 1, the impact on the market is illustrated. Initially, the market was in balance. In other words, the quantity supplied Q* and the quantity demanded Q* was equal. Hence the price was at P�. Facing an increase in the input prices and the concern of deforestation, Chinese producers were forced to decrease the supply, since these are both factors that determine supply. At every quantity, the producers had to pay more. The effect of this upward shift in supply is shown in the graph as an increase in price from P� - P�, and as a decrease in the equilibrium quantity, Q* - Q�. ...read more.

On the other hand, Keynesian politicians believe that the government needs to step in, to speed up the recovery. In this case, the ECB, advocates government intervention. As mention, the ECB utilizes contractionary monetary policies in order to stabilize the economy and attain creeping inflation of about 2%. To accomplish this, an approach of increasing the interest rates was used. In Diagram 1, the impact of higher interest rates is shown. The LRAS, SRAS and Aggregate demand intersect at equilibrium, E, to produce at Q*, which represents full employment. When the interest rate is increased from 3.25% to 3.5%, firms and companies will borrow less money, because it is more expensive. Firms will have less money for investment, which will decrease. Since investment is a component of aggregate demand (C+I+G+NX), it will shift downward from AD� to AD�. The price level thus moves from P� to P�. In addition, the output is decreased alongside with the price. In turn, this will increase unemployment, because firms will have to lay off workers at a lower price. This is a great example of the trade off, governments face between inflation and unemployment. At this point, the ECB can utilize two different approaches as a way to decrease inflation even further. It can either intervene in the market, or it can leave the market by itself: Laissez Faire. In the case of promoting the classical philosophy, monetary neutrality becomes evident. Diagram 2, illustrates how the economy returns to full employment, but with a different price level. The SRAS�, shifts downward to SRAS�, decreasing the price level even further, and returning to full employment at Q*. The reason for this downward shift in the SRAS curve comes after lower price expectations. At lower price levels, wages are lower, thus production cost. Since costs are lower, manufacturers have an incentive to produce more. Compared to the original price in diagram 1, the price is lower now, but the economy is still producing at the same level. ...read more.

"It is a fight to keep users from switching carriers," at which the root of interdependence lies. If, for example, KDDI lowers the price for their services, they steal demand from DoCoMo and Softbank, and hence profit. Those two firms will therefore lower their price in order to recoup the lost consumers. Hence all three firms sell their service at a lower price with the same demand, but with lower profit due to the inelastic demand below the Nash equilibrium. All three firms are in a dilemma in which they will experience a drop in profits, which is held accountable for by other firms, regardless of what they do. As it is mentioned in the article, competition also takes place in a non-price respect. DoCoMo, for example, now offers free calls between family members, which Softbank responded to with free calls between all its users. Logically the formation of cartels is not mentioned in the article, since it is illegal, but the firms could actually raise their profits if they decided to collude and act as a monopoly. The result of the non-collusive market described in the article is lower profits, which is due to lower prices. If the firms acted as a monopoly they could keep the price at a higher level. This is shown in the diagram below. Eventually the market would settle at the Nash equilibrium. If it were to act as a monopoly, profits would increase to Qab. This illustrates that short run incentives sometimes can mislead the individual from where the actual profit is. The article provides an excellent insight into the nature of an oligopolistic market. Such a market is characterized by interdependence among other things as explained. All those traits are reflected in the Japanese cell phone industry, and thus underline the structure of its own market. Eventually the market will settle after the price war, but as it has been shown, the profit for the entire market will decrease, and it would actually have been better for them to form a cartel. 1 http://www.destatis.de/indicators/e/arb210ae.htm ?? ?? ?? ?? 22 ...read more.