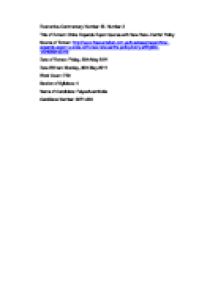 Economics Commentary Number: SL Number 3 Title of Extract: China Expands Export Quotas with New Rare-Earths' Policy Source of Extract: http://www.theaustralian.com.au/business/news/china-expands-export-quotas-with-new-rare-earths-policy/story-e6frg90o-1226059492319 Date of Extract: Friday, 20th May 2011 Date Written: Monday, 30th May 2011 Word Count: 729 Section of Syllabus: 4 Name of Candidate: FaiyazAzamKolia Candidate Number: 3071-040 CHINA EXPANDS EXPORT QUOTAS WITH NEW RARE-EARTHS' POLICY CHINA has tightened its control over rare earths by expanding its export quota system, imposing higher taxes and announcing that it wants its biggest companies to lead the industry's development. It also said it will get tough with companies that resell export quotas and won't approve any new projects - or the expansion of existing ones - in rare earth separation over the next five years. The measures were announced separately by the State Council, or Cabinet, and the Commerce Ministry in an apparently co-ordinated offensive in a sector that has become highly politicized. The State Council said the country aims to concentrate 80 per cent of the heavy rare earth mining business in the hands of the three biggest companies in the next one to two years. It's the first time that Beijing has publicly said it will let the three biggest companies head a consolidation of the industry. ...read more.

Heavy rare earths are more valuable, giving exporters an incentive to ship overseas for higher returns. The State Council said it "clearly forbids" the resale of quotas and has promised to improve the system of allocating quotas. People familiar with the situation have said previously that some companies with export quotas make big profits by reselling export quotas. Beijing also pledged to combat illegal rare earth mining and mining above quota levels, as well as improve the export monitoring system to stamp out smuggling. China is also building strategic stockpiles of rare earth metals, an effort that could give Beijing increased power in influencing global prices and supplies. Surging rare earth prices have also triggered discontent in China's own downstream industries. Some deep-processing companies are complaining that high raw material prices are squeezing profits, and they are unable to obtain the resource as some companies prefer to export rare earths for greater returns. The State Council said it will halt approvals of rare earth separation projects in the next five years and "resolutely ban" capacity expansions at existing plants. The article primarily sheds light on China's effort to 'oligopolize' the rare earth export scene; some of its measures include higher export taxes, 'forbidding' the resale of export quotas and 'ban' of any new projects or expansion of current ones in the next five years. ...read more.

To prevent this, constant monitoring of tariff rates and export quotas is inevitable which might be tedious. Another disadvantage is that illegal smuggling of rare earth metals will also become that much more valuable; smugglers will invent new ways of mining above quota levels since the stakes are higher. Export quotas or tariffs are a good strategy for a 2-3 year period but in the long run, other countries might use similar strategies and China will end up paying a high price for its greed. Example - Currently, China imports more than 50% of the crude oil used nationwide and is the second largest oil consumer in the world. As its population rises, it is inevitable that by 2030, its oil imports will equal imports by the U.S today. Analysts have shown that proven Oil reserves in China will only last till 2020 and then it will start importing even more. All in all, it should be wary of its 'trading attitude' otherwise it might get a taste of its own medicine. All in all, taking into consideration worldwide prices in rare earth metals and in terms of regularizing all the highly competitive rare earth companies into one organizationally cohesive whole, export tariff and quotas are the best strategies but economic subsidies to China's own companies will also be helpful. ?? ?? ?? ?? Name of Candidate: FaiyazAzamKolia Candidate Number: 3071-040 7 ...read more.