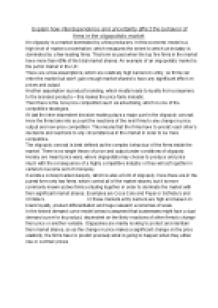 ﻿Explain how interdependence and uncertainty affect the behavior of firms in the oligopolistic market An oligopoly is a market dominated by a few producers. In this economic model is a high level of market concentration, which measures the extent to which an industry is dominated by a few leading firms. This term is used when the top five firms in the market have more than 60% of the total market shares. An example of an oligopolistic market is the petrol market in the UK. There are a few assumptions, which are relatively high barriers to entry, so firms can enter the market but won?t gain enough market shares to have any significant effect on prices and output. Another assumption is product branding, which mostly leads to loyalty from consumers to the branded products ? this makes the price fairly inelastic. Then there is the non-price competition such as advertising, which is one of the competitive strategies. At last the inter-dependent decision-making plays a major part in the oligopoly concept. Here the firms take into account the reactions of the rival firms to any change in price, output and non-price competition. ...read more.

When this occurs, existing firms are forming price fixing cartels, which is in most countries deemed illegal, although it is hard to prove that a group of firms have deliberately joined together to change the market circumstances to their advantage. Collusion is often explained through the greed to achieve joint-profit maximisation or to prevent price and revenue instability. Therefore price fixing gets introduced, so that suppliers can control the supply and fix the prices close to the price levels of monopoly concepts. To collude on price, producers must be able to exert some control over the market supply. In figure 4 it is show that a producer cartel is assumed to fix the cartel price at price Pm. Here there might be an output quota to distribute the cartel?s output. In contrast the individual firm?s output quota is unlikely to be at the profit maximising point, because for any one firm expanding output and selling at a price that slightly undercuts the cartel price, extra profits can be achieved. The problem here is that it shouldn?t be to such an extent that every firm is doing that with the result of excess supply in the market and a fall in price. ...read more.

If we now apply the game theory to real business decisions, we can use the example of 2 firms with different output outcomes when different decision been made. Firm B?s output Firm A?s output High output Low output High ouput $5m/$5m $12m/$4m Low output $4m/$12m $10m/$10m Here the reward for both firms choosing to limit supply and thereby keep the price high is that each of them earns $10m. In turn if they would just follow their own interests again, each of them would gain only $5m. If they will both decide for having a high output, the consequence will be less revenue ? this example illustrates the breakdown of price-fixing agreements, which can lead to price wars. The game theory once again analysis the behaviour of both parties, to evaluate the risk of the actions from one firm and the consequences of the reactions from the other firm. As a conclusion sentence it could be said that everything in oligopolies depend on the prediction of the firms? likely behaviour and through which concept they might react. This means whether they will have a collusion and work together for greater outcomes or price wars to prevent, that the other firm will be more competitive than they are. ...read more.