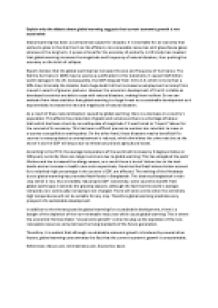 ﻿Explain why the debate about global warming suggests that current economic growth is not sustainable Global warming has been a controversial subject for decades. It is inevitable for an economy that wishes to grow in the short term as the efficient, non-renewable resources emit greenhouse gases whereas in the long term, it poses a threat for the economy of posterity. A UN study has revealed that global warming increases the magnitude and frequency of natural disasters, thus pushing the economy on the brink of collapse. Experts believe that the global warming has increased the size and frequency of hurricanes. The Katrina hurricane in 2005 may be used as a justification to this statement; it caused $125 billion worth damage in the US. ...read more.

As a result of these natural disasters caused by global warming, there is a decrease in a country?s population. This affects the production of goods and services as there is a shortage of labour. Haiti which had been struck by an earthquake of magnitude 7.3 was forced to ?import? labour for the survival of its economy. This has been a difficult process as workers are reluctant to move in a country susceptible to earthquakes. On the other hand, these disasters may be beneficial if a country is overpopulated as unemployment is reduced, which diminishes the crime rate but at the end of it all, the GDP still drops due to infrastructural and agricultural losses. ...read more.

This destroys Bangladesh?s main crop which is rice, thus incredibly reducing its GDP. Conversely, some countries benefit from global warming as it extends the growing seasons, although the fact that the world?s average temperature is continually increasing is not changed. There will come a time when the extremely high temperatures will not be suitable for any crop. Therefore global warming eradicates any prospect of a sustainable development. In addition to the threats posed by global warming for a sustainable development, there is a danger of the depletion of the non-renewable resources which cause global warming. This is where the economist Herman Daly?s ?uneconomic growth? come into play as the depletion of the non-renewable resources compromises the living standards of the future generation. Therefore, it is evident that although a sustainable economic growth is hindered by several other factors, global warming consummates the fact that the current economic growth is unsustainable. ...read more.