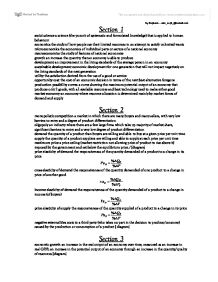 Section 1 social science a science (the pursuit of systematic and formulated knowledge) that is applied to human behaviour economics the study of how people use their limited resources in an attempt to satisfy unlimited wants microeconomics the economics of individual parts or sectors of a national economy macroeconomics the study of features of national economies growth an increase the quantity that an economy is able to produce development an improvement in the living standards of the average person in an economy sustainable development economic development for one generation that will not impact negatively on the living standards of the next generation utility the satisfaction derived from the use of a good or service opportunity cost the cost of an economic decision in terms of the next best alternative foregone production possibility curves a curve showing the maximum potential output of an economy that produces only 2 goods, with all available resources and best technology used to make either good market economy an economy where resource allocation is determined mainly by market forces of demand and supply Section 2 monopolistic competition a market in which there are many buyers ...read more.

caused by the production or consumption of a product [diagram] Section 3 economic growth an increase in the real output of an economy over time, measured as an increase in real GDP; an increase in the potential output of an economy through an increase in the quantity/quality of resources [diagram] economic development the reduction/elimination of poverty, inequality and unemployment within the context of a growing economy; improvement in the living standards of the average person; the reduction of absolute poverty and an increase in the distribution of basic necessities (such as food, drinking water, shelter) ---an improvement in welfare measured from a number of viewpoints, such as monetary measures, health measures, education measures etc Gross Domestic Product the total value of all (final) goods and services produced within an economy over a period of time (usually one year) real GDP the total value of a nation's output generated from resources within its boundaries, over a given period of time, and adjusted for inflation recession at least 2 successive quarters of negative (economic) ...read more.