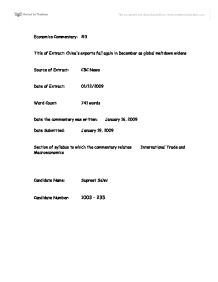 The advantages and disadvantages of trade account for a significant amount of a country’s economy with specific reference to the domestic markets. Trading goods and services on an international scale improves the production possibility frontier (PPF) which leads to a better standard of living. The principles of trade have the ability to make all participating parties involved economically better off.

Specific to this situation, a trade slump has initiated a sequence of acts which has caused “…exports falling 2.2 per cent and imports plunging 17.9 per cent.” The collapse in China’s trade growth has caused a significant decrease in the number of exports and imports which are a significant part of the GDP equation (X-M). These changes affect the trade balance – the difference between the monetary value of exports and imports made by China. Primarily, this change is beneficial in such way that there is a viable balance of payments and value for (X – M) becomes greater (positive) which helps contributing to a higher value for GDP. The value of falling import rates is significantly higher than the falling export rates which indicate that China is profiting from the exports and paying drastically less for the goods and services being imported. The declining import rate at 17.9 per cent is suggesting a rapid contraction in the domestic industry therefore as to why the import rates have dropped drastically. Another contributing reason to declining import rates is the plunge in the price of oil and other commodities over the past couple of months. China as the world’s fourth largest economy holds an important share of the world’s exports which has been lead to shrinking export rates. The global financial crisis has caused a decline in world consumer sales and overall demand for products and consequently, the falling export rates have hit many companies in China which have been heavily invested by from abroad. Therefore, the overall drop in demand worldwide has affected the PPF of China.

This graph shows a relationship between the aggregate supply (AS) and aggregate demand (AS) of Chinese goods (of which mostly all are exported) where the AS curve has shifted to the left resulting in a surplus (oversupply of goods and services). The demand for products worldwide has decreased (the exports have decreased) and the overproduced products cannot be sold as demand of Chinese products have decreased (which are mainly imported). 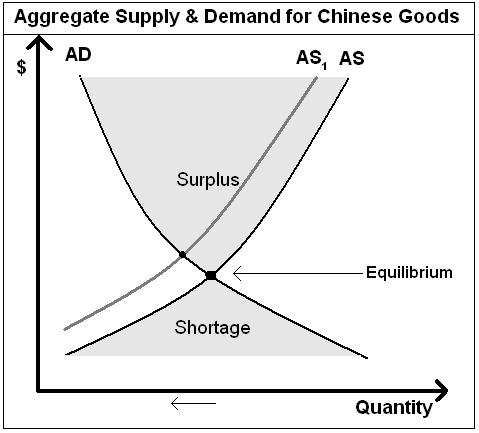 The economic policy known as Protectionism [[1]] is being applied by the Chinese government to restrain trade in order to boost the domestic economic activity. The downfall of domestic industries has also “…triggered a wave of factory closures and layoffs” which is also why a great descend in the import values has been spotted. This has put China’s huge engine of employment at risk and jeopardized millions of other jobs however the decrease in the exports was the start of a chain which subsequently lead to such decreases. By utilizing the method of protectionism, the Chinese government is protecting employment as it will encourage a greater domestic production activity and create more demand for workers. However, this solution is a possibility, it is uncertain if the falling rates of employment and factory closure rates will recover in China. This is because the Chinese economy exclusively produces to export products with which only a tiny fraction are sold inside China and the demand for Chinese products around the world is declining which is why the export rates declined initially. So accordingly, the domestic producers in China do not hold the same amount of consumers to produce for, sell their goods and services or export to. Therefore, China’s export reliant markets pose a question for an uncertain outlook on the trade growth rate and the economy itself.

In closing, the world’s fourth largest economy has been put widely out of balance. This article evaluates the unusual decrease in Chinese imports and exports many people in China out-of-pocket and risks the manufacturing sector along with employment conflicts.

A trade slump has prompted a wave of factory closures and layoffs.

Exports in December were down 2.8 per cent from the same time last year. Imports fell even more sharply, declining 21.3 per cent in a reflection of the country's domestic economic slowdown.

The slump has triggered a wave of factory closures and layoffs that communist leaders worry could fuel unrest.

December's decline came after China's trade growth collapsed in November, with exports falling 2.2 per cent and imports plunging 17.9 per cent.

[1] An economic policy which is used to restrain trade between different nations, through methods like tariffs, quotas, restrictions and subsidies used mainly to ban cheap imports an protect domestic suppliers.