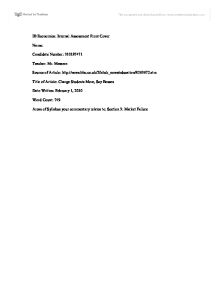 IB Economics: Internal Assessment Front Cover Name: Candidate Number: 310187471 Teacher: Mr. Messere Source of Article: http://news.bbc.co.uk/2/hi/uk_news/education/8263672.stm Title of Article: Charge Students More, Say Bosses Date Written: February 1, 2010 Word Count: 749 Areas of Syllabus your commentary relates to: Section 3: Market Failure Knowledge is power, and in today's world, many equate procuring knowledge with attending university. The rates of young people in post-secondary education have increased over the years, as have the costs that come with this. Because of the perceived social benefit associated with a greater number of university graduates, the British government aims to have 50% of high school graduates continuing to university. This was done through the introduction of upper limits on tuition fees and low interest loans for students. However a recent report by the CBI suggests that this objective is no longer worthwhile and that students are the source of capital which can save British universities struggling in the current market. ...read more.

Because tax revenue is used to finance university education, the question becomes that whether the estimated social benefit outweighs the costs associated with it. The issue is subjective, only inferences can be made from the experiences of other nations, such as the Soviet Bloc, where free universities equaled a high degree of technical knowledge, but not implementation due. What is known however, is that the public is inclined to underconsume merit goods, and thus not fully reap the benefits associated with them. The UK ranks below average (1.44% of GDP as compared to other G8 countries) in spending on higher education, but above average (17.3% of the above) in financial aid for students. These policies may have been created by a Labour government seeking public support. The cause for the policies notwithstanding, it is true that a more educated workforce results in higher productivity and improved employability and mobility. ...read more.

This may be beneficial for the British economy as a whole, but it is unknown whether the benefits from freeing up capital outweigh the costs of such a move. Taking into account the current economic situation, it may be tempting to temporarily decrease subsidies. However, that cut to funding would have long term negative implications for the state of British science and technology, at one point a shortage of scientists and engineers would appear. Rather, it may be prudent to divert these subsidies into achievement based grants in economically fruitful fields, such as science and technology. In addition to these measures, the government may try to alleviate the immobility of the factors of production, in this case universities, promoting e-learning. This approach as practiced by MIT which posts free lectures online, would make higher education nonrivalrous (there is no feasible limit on hosting), and thus closer to a socially beneficial public good. ...read more.