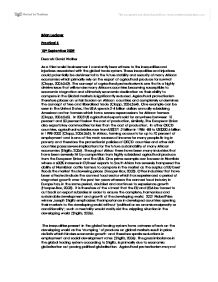 Brian Lockyer Practical 5 10th September 2009 Dear Mr David Walker As a third world businessman I constantly bear witness to the inequalities and injustices associated with the global trade system. These inequalities and injustices could potentially be detrimental to the future stability and security of many African economies which primarily rely on the export of agricultural produce for survival (Clapp, 2006:563). The concept of agricultural protectionism is one that is a highly divisive issue that will render many Africans countries becoming susceptible to economic stagnation and ultimately economic declination as their ability to compete in the Global markets is significantly reduced. Agricultural protectionism therefore places an unfair burden on African countries and completely undermines the concept of free and liberalized trade (Clapp, 2006:564). ...read more.

people living in poverty and therefore the protectionist policies of OECD countries and other rich countries poses severe implications for the future sustainability of many African economies (Stiglitz, 2006). Throughout Africa there have been many industries that have been severely hit by competition from highly subsidized agricultural produce from the European Union and The USA. One prime example can be seen in Namibia where a 600% increase in EU beef exports to South Africa has severely hampered the ability of Namibian cattle farmers to compete in the market as the surplus of EU beef floods the market thus lowering prices (Hooper-Box, 2003). Other industries that have been affected include the canned food sector which has experienced a period of stagnated growth over the past ten years whereas the canned food industry in Europe has, in the same period, doubled and continues to experience growth (Hooper-Box, 2003). ...read more.

The inequalities present in the global trading system have adverse affects on the developing world as the 'dumping' of produce on global markets result in price deficits which hinders economic growth and therefore sparks reductions in employment and social development rates (Stiglitz, 2006). The gross imbalance in the global trading system according to Stiglitz, is primarily due to economic globalisation out pacing political globalisation. Agricultural protectionism may not be the cause of poverty and underdevelopment in Africa; however the liberalization and implementation of free trade routes without barriers would sufficiently aid and improve the perilous situation in Africa. Africa is in dire need of investors and the opening of global trade markets would entice investment and therefore encourage the much needed economic growth. The strict implementation of regulations is a necessity in policing the detrimental effects that globalisation is having on the developing world. ...read more.