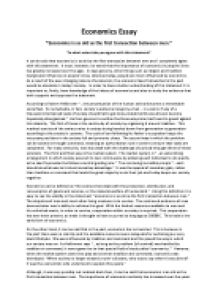 Is Economics as old as the first Transaction between Men?

﻿Economics Essay ?Economics is as old as the first transaction between men.? To what extent do you agree with this statement? It can be said that economics is as old as the first transaction between men and I completely agree with this statement. It must, however, be noted that the importance of economics in people?s lives has greatly increased over the ages. In days gone by, other things such as religion and tradition had greater influence on people?s lives, whereas today, people are more influenced by economics. As a result of the ever-changing nature of economics, the economic laws that existed in the past would be obsolete in today?s society. In order to have a better understanding of this statement it is important to, firstly, have knowledge of the history of economics and also to study the evidence that both supports and opposes the statement. ...read more.

For many centuries, man has dealt with the challenge of survival through either of these solutions. The third and final way is the market system. The market system is ?...an astonishing arrangement in which society assured its own continuance by allowing each individual to do exactly as he saw fit-provided he follow a central guiding rule.? The rule being incredibly simple ?...each should do what was to his best monetary advantage.? It was the appeal of monetary gain, rather than tradition or command that leads the great majority to do their job and today keeps our society together. Economics can be defined as ?the science that deals with the production, distribution, and consumption of goods and services, or the material welfare of humankind.? Using this definition it is easy to see the validity in the statement ?economics is as old as the first transaction between men.? The objective of man and most other living creatures is to survive. ...read more.

?When society no longer obeyed a ruler?s dictates, who was to say where it would end? It was the economists who undertook to explain this puzzle.? Although, it was very possibly not realised back then, it can be said that economics is as old as the first transaction between men. The importance of economics certainly has increased over the years and the role it plays in people?s lives now is greater than it did in the past. However, I believe that economics has always been one of the key components of man?s survival, whether today or 3000BC. Of course in the past people had wants and need just like we do today and therefore the methods, such as trading, that they used to obtain these things fall under the category of economics. ...read more.