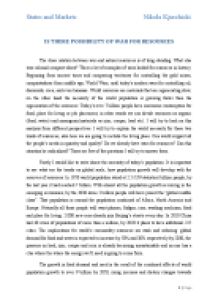 Is there possibilities of war for resources?

﻿States and Markets Nikola Kjurchiski IS THERE POSSIBILITY OF WAR FOR RESOURCES The close relation between war and natural resources is of long standing. What else was colonial conquest about? There a lot of examples of wars leaded for resources in history. Beginning from ancient times and conquering territories for controlling the gold mines, conquistadores from middle age, World Wars, until today?s modern wars for controlling oil, diamonds, coca, and even bananas. World resources are materials that are regenerating slow, on the other hand the necessity of the world population is growing faster than the regeneration of the resources. Today?s over 7 billion people have enormous consumption for food, place for living or job placement, in other words we can divide resources as organic (food, water) and nonorganic(materials as zinc, cooper, lead etc). I will try to look on this analysis from different perspectives. I will try to explain the world necessity for these two kinds of resources, also here we are going to include the living place. Can world support all the people?s needs in quantity and quality? Do we already have wars for resources? Can this situation be radicalized? These are few of the questions I will try to answer them. Firstly I would like to write about the necessity of today?s population. It is important to see what are the trends on global scale, how population growth will develop with the reserves of resources. In 1950 world population stood at 2.5 (UN statistics) billion people, by the last year it had reached 7 billion. With almost all the population growth occurring in the emerging economies, by the 2030 some 2 billion people will have joined the ?global middle class?. That population is around the population combined of Africa, North America and Europe. ...read more.

find information that there were seventy-three civil wars, almost all driven by greed to control resources?oil, diamonds, copper, cacao, coca, and even bananas. Countries with one or two primary export resources have more than a one-in-five chance of civil war in any given year. In countries with no such dominant products there is a one in a hundred chance. In these civil wars more than 90 percent of casualties are civilians. At the start of the twentieth century war casualties were 90 percent soldiers. Such ?traditional? wars are rare today. Resource wars with their devastating impacts on civilians have become the norm. Indeed, the oil rich countries of Africa have long histories of coups, military rule, and strongmen. Millions have died of hunger and disease as a result of wars over oil, diamonds, copper, and other resources as armed rebels steal, r**e, and murder making life-generating economic activity difficult if not impossible. In the Congo, one of the resource richest countries on the planet, a half dozen countries have armies deployed and countless rebel groups have fought to control rich deposits of gold, diamonds, timber, copper, and valuable cobalt and coltan in what is often referred to as ?Africa?s First World War.? Africa bleeds because of its abundant wealth. The resources of Liberia were privatized by selling rights to resources to foreign companies and pocketing the money. There is the case of Dafur in the oil rich Sudan. There is Nigeria, exceedingly rich in oil and corruption, where foreign aid is badly needed. The environment of the Niger Delta is being destroyed, and people are killed by army thugs protecting Shell oil. Equatorial Guinea is a criminalized state which receives half a billion in oil revenues. ...read more.

In Bolivia Evo Morales nationalized the energy industry, causing the United States to express disapproval regarding Morales’s “weak commitment to democracy” (echoing its charge against Chávez). However, Bolivia’s first elected indigenous president, according to the leading polling organization in the country, enjoyed an 80 percent approval rating in the spring of 2006. The major enemies of the United States somehow seemed to be oil producers, a group of countries that given the current high energy prices cannot be easily intimidated through economic sanctions or political pressure. The resource war against the environment will be better avoided when we stop counting consumption of nature as income, as a free good, while we deplete our natural capital. The past rates of accumulation of capital which are now blithely projected forward were possible because of the unsustainable usage of natural resources. Mainstream economists have a great deal of responsibility for ignoring the distinction between natural capital and human made capital. When we sum up everything, we can conclude that world resources are spendable, and this is basic mathematics, world population is growing and it needs more and more necessities. Organic, nonorganic resources, place to live and service quality. This was one of the main causes because wars happens, and my opinion is that the question is not “is there possibility of wars for resources?” because there is already war for resources. West countries are already use different excuses, just for one goal- to grab world resources. They use their armies to protect big multinational corporation’s interests in foreign countries. With every new day rises, this situation and pressure goes up. How we respond to these resource pressures will determine what kind of society we shall have and what sort of planet ours will be. ________________ | Page ...read more.