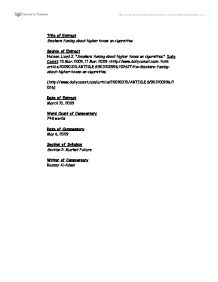 Title of Extract Smokers fuming about higher taxes on cigarettes Source of Extract Nelson, Lloyd J. "Smokers fuming about higher taxes on cigarettes." Daily Comet. 10 Mar. 2009. 11 Mar. 2009 <http://www.dailycomet.com>. Path: article;20090310;ARTICLES;903100996;1026?Title=Smokers-fuming-about-higher-taxes-on-cigarettes. (http://www.dailycomet.com/article/20090310/ARTICLES/903100996/1026) Date of Extract March 10, 2009 Word Count of Commentary 748 words Date of Commentary May 6, 2009 Section of Syllabus Section 2: Market Failure Writer of Commentary Rammy Al-Abssi Portfolio Assessment - Market Failure Caused by many different reasons, on February 4, 2009 President Barack Obama signed a legislation that increased federal taxes on tobacco to its highest prices yet. The taxes will be enforced on April 1 on all tobacco products. "Beginning April 1, the federal tax on cigarettes will go up from 39 cents per pack to $1.01 per pack. Large cigars will be taxed 40 cents a piece, up from 5 cents... ...read more.

However, there are also numerous limitations which arise when studying Obama's decision. First, cigarettes have quite an inelastic demand. This means that taxes do not manage to reduce the amount of cigarettes smoked very much. Basically this could mean that there was no dramatic change in the negative externality or welfare loss. Also, if the taxes placed on tobacco is raised too much than this can lead to many different corrupt actions. For example, if on April 1 when the taxes are enforced, a huge amount of people stop buying tobacco, the people could look for other sources of supply. One case could be a black market forming between the US and Mexican boarder. If drugs and tobacco are smuggled illegally, this could lead to many worse negative externalities. According to this analysis, Obama's decision to raise taxes a little more was a smart decision. The taxes were not raised enough to help form a black market; however, enough to force some people to quit smoking and also helping the expansion of the Children's Health Insurance Program. ...read more.