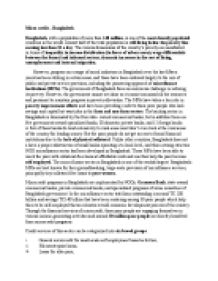 The Benefits of Microcredit to Bangladesh

﻿Micro credit ? Bangladesh Bangladesh, with a population of more than 140 million, is one of the most densely populated countries in the world. Almost half of the total population is still living below the poverty line earning less than $1 a day. The various dimensions of the country?s poverty are manifested in terms of inequality in income distribution (in favor of urban areas), wage differentials between the formal and informal sectors, dramatic increases in the cost of living, unemployment and internal migration. However, progress on a range of social indicators in Bangladesh over the last fifteen years has been striking in certain areas, and these have been endorsed largely to the mix of public and private service provision, including the pioneering approach of microfinance institutions (MFIs). The government of Bangladesh faces an enormous challenge in reducing its poverty. However, the government cannot act alone as it cannot command all the resources and personnel to maintain progress in poverty alleviation. The MFIs have taken a key role in poverty improvement efforts and have been providing credit to these poor people who lack savings and capital but want jobs in the farm and non-farm sectors. The banking sector in Bangladesh is dominated by the four state- owned commercial banks, but in addition there are five government owned specialized banks, 30 domestic private banks, and 12 foreign banks. ...read more.

In recent years, there have been some efforts in reaching these households by offering more flexible repayment schedules with a smaller loan sizes. Several studies also show that 15-30 percent of microcredit members are from ?non-target? groups as also measured by householder?s land size. The success of microcredit programs depends on the following challenges: 1. Enhancing the Resources versus Reaching the Poor Client 2. Smaller versus Larger loan sizes 3. Increase in client-base versus Sustainability of MFIs Achievements: Women empowerment: Women are given equal access to the Grameen schemes as a result; they have raised their status, lessened their dependency on their husbands and improved their homes and nutritional standards of their children. 90% of women who used begging as a means of survival now have roof over their heads and can support themselves. Group Savings: Group Savings have proven successful as group lending. Group savings have reached 698 million taka (US $ 23 Million approx), out of which 570 million taka 9US 419 million) are saved by women. The bank requires its borrowers to save. Each borrower saves one taka (2-5 cents) each week. As of today Grameen bank has collected so much money that they can collectively buy the largest enterprise in the country. ...read more.

The need of the hour is greater awareness and consciousness among the populace of the third world about the feasibility and the importance of the use of micro credit in their respective countries. GRAMEEN BANK? The system of this bank is based on the idea that the poor have skills that are under-utilized. A group-based credit approach is applied which utilizes the peer pressure within the group to ensure the borrowers follow through and use caution in conducting their financial affairs with strict discipline, ensuring repayment eventually and allowing the borrowers to develop good credit standing. The bank also accepts deposits, provides other services, and runs several development-oriented businesses including fabric, telephone and energy companies. Another distinctive feature of the bank's credit program is that the overwhelming majority (98%) of its borrowers are women. Grameen Bank continued to expand its outreach in Bangladesh in 2009 to bring new areas and new members within its operational fold. During the year, the bank opened 23 new branches bringing the total number of branches to 2,562 that dot the length and breadth of rural Bangladesh. Bank?s network--40 Zonal, 268 Area and 2,562 branch level offices--now encompasses 83,458 or over 99% of the country?s nearly 84,000 villages located in 479 upazilas or sub-districts in all 64 districts of Bangladesh. A fresh batch of 300,413 people joined the Grameen family in 2009, swelling the aggregate number to a staggering 7.97 million members. ...read more.