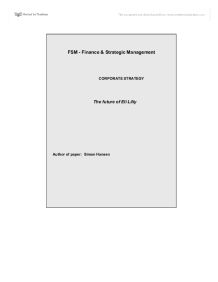 The future of Eli Lilly

FSM - Finance & Strategic Management CORPORATE STRATEGY The future of Eli Lilly Author of paper: Simon Hansen Introduction Eli Lilly is a company who faces the constant challenges of globalization. They operate in a global competition with product development aimed for the world market, not just a local market. This gives Eli Lilly a set of challenges which they need to deal with, in order to be competitive at the world market now and in the future. In a market as the pharmaceutical, research and development is key. Without a constant flow of new patents and products, any pharmaceutical company will suffer the pain of a slow death. With the entrance on the market in India by creating a joint venture with the local company Ranbaxy, Eli Lilly secured a bridgehead in a fast growing and very exciting market, India. At the time a joint venture with Ranbaxy was probably the only right solution, with the current law and legislation. But now times have changed, and Eli Lilly must consider its current position in India in accordance with overall corporate strategy of this multinational company. Problem statement The future of Eli Lilly Ranbaxy and its partners are uncertain as the Indian market has changed. ...read more.

This could be a costly affair. Joint Venture in a global corporate strategy Changes Almost ten years has passed since the establishment of Eli Lilly Ranbaxy, and the pharmaceutical business in India has changed a lot. Legislation and market situation are the main contributors to these changes. Legislation A new more open legislation has been introduced, meaning that foreign investments are more welcome and secure. This states that foreign companies now are allowed to own more than half of the companies as the law stated before. Furthermore products and processes are now protected by patents. It is almost impossible to convince foreign companies to invest in research and development, when the result is not protected in any way and therefore open to copying by anyone else. Market3 When Eli Lilly and Ranbaxy joined forces in the joint venture, the Indian company was going strong. Towards the meeting between the two partners in 2001, Ranbaxy has experienced troubled waters. In 1992-93 Ranbaxy's share of foreign sale was 30% compared to 46% in 2000, clearly indicating that Ranbaxy had become a more internationalized company, even with activities in Eli Lilly's home market, United States of America. ...read more.

But now time has changed, and the India market is not the same. The market has seen remarkable growth, as well as reforms securing a better soil for a foreign investment from Eli Lilly. A subsidiary in India is essential in securing a place at the growing market, as well as a R&D centre is a potential that should be invested in. The best decision would be to secure the entire joint venture, by buying Ranbaxy's share. There will be a lot of Indian companies interested in Eli Lilly's technology, and with patents introduced it gives the American company a chance to securing these in the ever constant global competition. Foreign development investments are crucial for a pharmaceutical company in order to assure a steady flow of patents, as the overall cost base are lower outside the U.S. This means that cheaper patents could be obtained, and therefore leading to higher gross margins that the ones produced back home. By doing this, Eli Lilly could be securing their future. 1 Ari�o, de la Torre, Ring (2001). 2 Rajiv Gulati, case material. 3 Case material 4 Ambos, 2005. 5 Ambos, 2005. 6 Kuermmerle, 1998. 7 Ambos, 2005. 8 Kuermmerle, 1998. 9 Kale, Singh and Raman, 2009. 10 Capron, 1999. ?? ?? ?? ?? [2] ...read more.