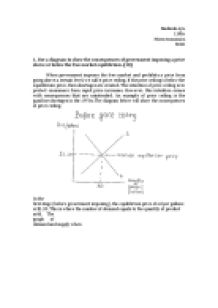 This is a law that prohibits landlords to raise the price of rent to go above the price that they have determined. This law is determined by state or country legislatures. In Mumbai, the rent control act started in 1947, with the intentions of making houses affordable to more people. In rent control, the government imposes the price below the free market equilibrium, making the price lower than what it is supposed to be. Although the government intended well, the act proved that instead of benefitting the whole country, it mostly only benefit some of the poor and the people who already rented a place before the rent control. In the short run, rent control helped many people in obtaining places to live. This mostly helped the poor people who could not afford rents before. However, the effects of rent control have not fully happened in the short run. The number of people who look for housing may not be as high as it takes time to arrange housing. ...read more.

The lack of supply of rents is also seen as the biggest reason for slums in Mumbai. As the number of rents occupied increase and the number of the rents available decrease, more people would not have a place to live, resulting to the slums in Mumbai. Not only does rent control affect the tenants, it also effects what the landlords do. Because the price of rents fall, the landlords would not earn as much money as they did before, when it has potential to earn much more money. As a result, the landlords would decrease the quality of the houses. They could also charge the tenants for things that are supposed to be included in the rent expense, such as TV. In conclusion, rent control acts, particularly in Mumbai had more disadvantages than advantages. Even though it protects the rights of the poor by decreasing the price below the equilibrium, rent control only lead to a shortage of rent. The shortages would then cause slums to increase, as the demand extends but could not be fulfilled. ...read more.