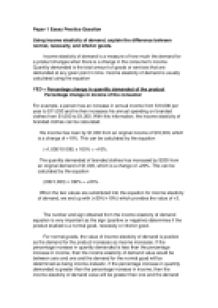 ﻿Paper 1 Essay Practice Question Using income elasticity of demand, explain the difference between normal, necessity, and inferior goods. Income elasticity of demand is a measure of how much the demand for a product changes when there is a change in the consumer?s income. Quantity demanded is the total amount of goods or services that are demanded at any given point in time. Income elasticity of demand is usually calculated using the equation YED = Percentage change in quantity demanded of the product Percentage change in income of the consumer For example, a person has an increase in annual income from $10,000 per year to $11,000 and he then increases his annual spending on branded clothes from $1,000 to $1,200. ...read more.

For example, the demand for inexpensive, budget-price clothing will fall as income rises as people will now be able to purchase branded clothing as a result of an increase in income. In addition to normal, necessity, and inferior goods, there are also a fourth category of products called superior goods. Superior goods are products that often have a high income elasticity. The demand for them will vary significantly following a rise in income as people have more income to satisfy their needs, they will begin to use their money to purchase products that are wants. These wants are usually non-essential with common examples being computers, phones, electronics and vacations in foreign countries. These products or services are determined as being income-elastic. ...read more.