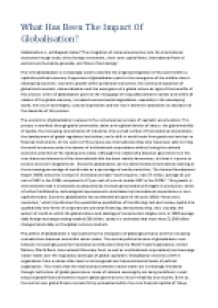 What has been the impact of globalisation?

﻿What Has Been The Impact Of Globalisation? Globalisation is, as Bhagwati stated ?The integration of national economies into the international economy through trade, direct foreign investment, short term capital flows, international flows of workers and humanity generally, and flows of technology?. The term globalization is increasingly used to describe the ongoing integration of the world within a capitalist political economy. Supporters of globalization point to the emergence of the middle-class in developing countries, economic growth within peripheral economies, the continued expansion of global stock markets, democratization and the emergence of a global culture as signs of the benefits of this process. Critics of globalization point to the rising gaps of inequality between nations and within all nations of the global economy, increased environmental degradation, especially in the developing world, the loss of sovereignty, cultural imperialism and the rise in extreme nationalism as indicators of the downside of this process. The economics of globalization represents the contemporary process of capitalist accumulation. This process is manifest through global commodity chains and a global division of labour, the global mobility of capital, the increasing concentration of industries into a small number of ...read more.

Economic globalization has accelerated because of the post 1960s ?electronics revolution,? which transformed the quantitative possibilities of transferring cash and money capital into qualitatively new forms of corporate and personal financing, entrepreneurship, and, crucially, the system of credit on which the global culture and ideology of consumerism largely rests. In 1980 average daily foreign exchange trading totalled $80 billion, today it is estimated that more than $1,500 billion changes hands daily on the global currency markets. The politics of globalization is represented by the emergence of global governance and the increasing contradictions between and within nation states. The central political tension of globalization rests between increasingly powerful transnational institutions (like the World Trade Organization, United Nations, World Bank, International Monetary Fund, as well as multinational corporations) and sovereign nation-states over the regulatory landscape of global capitalism. Globalization involves a shift in organization from a nation-state level to intra-regional and transcontinental levels of political organization. This means that the relationships between nation-states are increasingly mediated through institutions of global governance. Areas of national sovereignty are being redefined, in part because global financial markets require global governance to insure reliability and security. ...read more.

Since the late 1970?s, multinational corporations have been targeting distinct social groupings via ethnicity, gender, class, race, and s****l orientation in order to satisfy consumer needs and wants through the production, promotion, and delivery of goods and services. This strategy of constantly dividing and sub-dividing the world is enhanced by ?split-second? technology, which not only allows for the accumulation of detailed patterns of purchases by consumers, but also provides for the transmission of that knowledge in compact forms to any marketer with the money and the desire to buy such information. In this sense, global corporations have embraced multiculturalism in so far as it provides a vehicle to reduce active citizenship to patterns of consumption. That is, cultural differences are used to equate happiness and the realization of dreams to that of purchasing commodities. At the core of this ideology of consumerism is individualism; however, the internalization of this force for cultural homogenization is experienced in culturally specific ways. Although powerful, the cultural process of globalization can be interpreted using local cultural lenses and thus provide opportunities for resistance. ...read more.